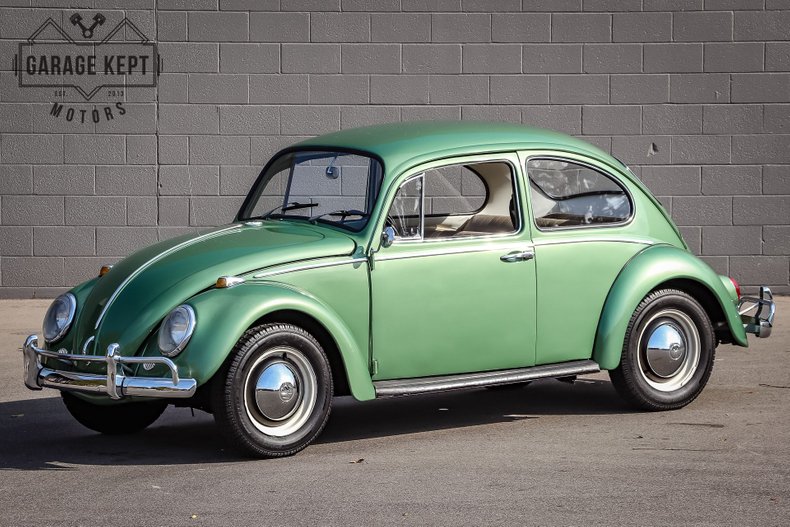 (Please note: If you happen to be viewing this 1966 Volkswagen Beetle on a website other than our Garage Kept Motors site, it's possible that you've only seen some of our many photographs of this vehicle due to third-party website limitations. To be sure you access all the more than 160 photographs and a short startup-and-walk-around video, please go to our main website: GarageKeptMotors.)

“The best Beetle of them all.” –Paul Niedermeyer, Curbside Classics, 6/7/15

To the untrained, all VW Beetles looked so similar, many people conclude that only relatively minor alterations were made to the original design through the years. But in-the-know VW Beetle historians, like the author quoted above, know that some Beetles rise far above others. So, considering how many millions of these cars were produced by the Wolfsburg company, “best Beetle” is quite a claim.

Twelve years earlier in 1954, the Beetle was given a 1200cc motor rated at 36 (gross) 30 (DIN/net) horsepower to replace the much smaller engines up to that point. As the Curbside Classics writer put it: “The Beetle now had a top speed of exactly 68 mph. And in 1961, the power of the 1200 was bumped to 40/34 hp, and top speed went to 72 mph.” That changed in 1966 with the launch of a new engine. “The… 1300 had by far the biggest one-time jump in power, a whopping 25%, from 40/34 horsepower (gross/net), to 50! (44 net) Wow; ten additional ponies…. That was suddenly good for a solid 80-82 mph top speed. And acceleration was dramatically improved. Zero-to- 50 now came in only 14.5 seconds, and zero-to-60 in about 22. In today's standards, that's laughable. But it was quite close to what a 1960 Falcon did, with twice the engine (2.4 L) and almost twice the horsepower (90). Another way to look at it was that the new 1300 had the exact same horsepower that the Porsche 356 1300 did just about a decade earlier.” The 1300 engine achieved its improved performance still using the same gear ratio in the 1200. That fact was cleverly captured in one of the classic VW ads from the brand's long-running campaign. The headline? “We made the car ago faster. And the engine go slower.”

The 1966 Beetle shown here in metallic medium green over black vinyl is a terrific example of this special Volkswagen. The car has been well-maintained through its lifetime and now shows a mere 1,196 miles on the odometer, which has been the mileage since restored. It does have an upgraded and rebuilt 1600, not 1300 for power. This is a very reliable and very drivable classic with power delivered easily through the floor-mounted 4-speed shifter. Too many Beetles have suffered from well intended, but ill advised “updating” and modifications that reduced the model's appeal and value. Not here.

The exterior paint great condition for its age, as is the brightwork, glass, and steel wheels with chrome VW-logo hubcaps. Emblems—including the “1300” on the rear hood—are properly mounted and display only light patina from age. The body is free of damage with tight panel-fit. Chrome bumpers with over-rider protection retain their original luster. The engine bay is complete and tidy, and the same is true of the undercarriage, showing only minimal surface rust on un-protected metal.

Inside, the pristine painted dash matching the exterior color is unaltered with the exception of an aftermarket Pioneer audio head unit with speakers concealed behind the rear seat. Ivory-colored vinyl upholstery is free of wear, damage, or signs of abuse. Tan carpeting is in place throughout the cabin. The large, round VDO speedometer and square VDO gas gauge is framed by the original steering wheel wearing the traditional Wolfsburg-castle VW logo (in homage to the company's northern Germany hometown) in its center. A single, characteristically simple chrome highlight runs the width of the dash. The original wicker parcel shelf is correctly mounted below the dash. The car's front trunk is as tidy as the rest of the car and houses a matching spare tire.

Short of an in-person inspection—which we always welcome—the more than 160 high-definition photos and the brief video available on the GarageKeptMotors site are the best way to gauge the lovely condition of the car. We ask only that appointments be made in advance to visit our Grand Rapids, Michigan showroom. That way, we can devote our full attention to our visitors and this lovely Beetle.

VW Beetle fans know these cars well. Many have probably already read the Curbside Classic article quoted here, but if that's not the case, be sure and search the issue online. The article is a wealth of information, old ads, and not a small amount of love for the brand in general, and the 1300 in particular. We are pleased to have this Beetle here in our showroom, but we don't expect it'll be around too long.