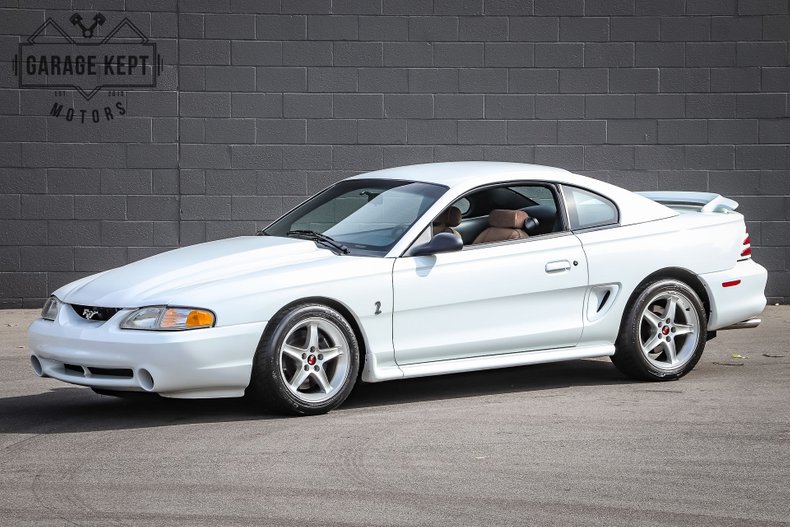 (Please note: If you happen to be viewing this 1995 Ford Mustang Cobra R SVT on a website other than our Garage Kept Motors site, it's possible that you've only seen some of our many photographs of this vehicle due to third-party website limitations. To be sure you access all the more than 165 photographs, a short walk-around-and-startup video, and a link to its pristine, 2-owner, accident-free Carfax report, please go to our main website: GarageKeptMotors.)

“It's trick and it's quick, but if you haven't already bought yours, sorry.” –Car and Driver, April 2005

According to Ford Performance, here are the details that made the Cobra R SVT so desirable: “In the wake of the Fox-bodied 1993 SVT Mustang Cobra R's success, SVT engineers developed a more powerful R-model competition package based on the SN-95-derived 1995 SVT Cobra. SVT replaced the Cobra's 5.0-liter with a special version of Ford's 351 cubic-inch Windsor small-block, re-engineered to produce 300 horsepower, and also installed a 20 gallon Fuel-Safe fuel cell. To handle the torque of the more powerful engine, a Tremec five-speed manual transmission was installed. Again, weight savings was targeted, so there was no back seat, radio, or air conditioning – not even fog lights, which were omitted to provide ducts for getting cool air onto the front brakes. Heavy-duty progressive-rate springs, thicker stabilizer bars and a front strut tower brace helped improve handling on the race track. Only 250 vehicles were built, available only in white, each with a unique center-tiered fiberglass hood tall enough to clear the engine and induction system.”

With only 250 identical cars available, Car and Driver expanded on how very difficult it was to become an owner of the Mustang Cobra R SVT: “To get your hands on one of the 250 racer-basis 1995 R-models, you needed to have your order spew out of the fax machine at Ford Special Vehicle Team between 2 p.m. EST January 5 and the moment they were all spoken for five days later. Missed it by that much.”

Offered here is one of the 250 cars in absolutely mint condition, literally a time capsule with just 924 total miles on the odometer. Even the original clear-plastic “temporary” carpet-protection appliques are still in place. Nobody's shoe has ever touched the carpet!

Inside, “pristine” continues to be the theme. Tan upholstery and trim, white-faced gauges, Tremec 5-speed shifter, headliner and carpeting are all as-new. The deletion of the rear seat and audio system stands out in the all-business cockpit.

Under the hood, here's how Car and Driver described the power: “The 351 V-8 from the F150 Lightning sport truck forms the basis for the R powerplant. It has the same 4.0-inch bore of the Mustang-orthodox 302, but its stroke stretches from 3.0 up to 3.5 inches. The Lightning's ratings of 240 hp at 4200 rpm and 340 pound-feet of torque at 3200 climb to the R's 300 hp at 4800 and 365 pound-feet at 3750. The increases are achieved via higher compression (9.2:1 versus 8.8), more aggressive cam timing, and a larger-diameter air-meter body. Cooling-system capacity is increased in anticipation of the racetrack duty cycle.” As with everything else, the engine, its components, and every aspect of the car's undercarriage literally exhibit no signs of use.

The remarkable condition of this '95 Mustang Cobra R SVT is faithfully presented from every angle (including from below) in the more than 165 high-definition photographs and the short walk-around-and-startup video available at the GarageKeptMotors site. That said, we always encourage in-person, up-close inspections by interested parties at our Grand Rapids, Michigan showroom. We ask only that advance appointments be made by phone or email so that we can devote our full attention to our visitors and this rare Cobra R.

So, in the end did you really “miss it by that much” as Car and Driver said? Maybe not.