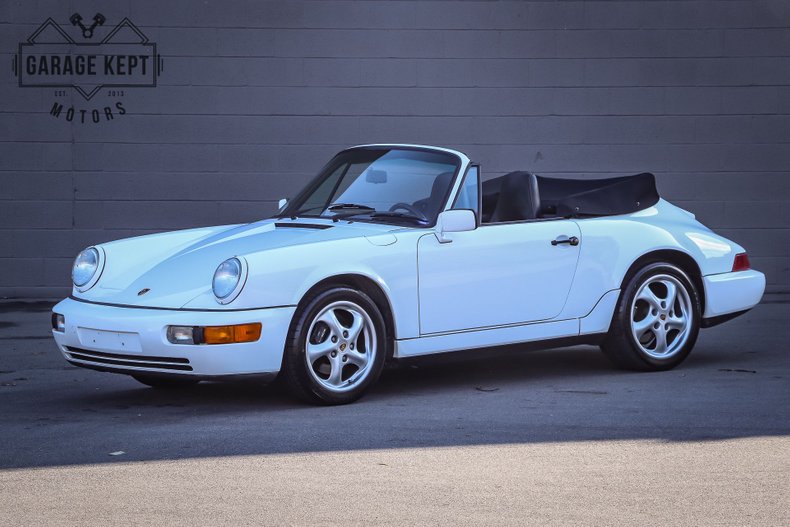 (Please note: If you happen to be viewing this 1991 Porsche 911 Carrera 2 Cabriolet on a website other than our Garage Kept Motors site, it's possible that you've only seen some of our many photographs of this vehicle due to third-party website limitations. To be sure you access all the more than 150 photographs, a short walk-around-and-startup video, and a link to its low-mileage, two-owner Carfax report, please go to our main website: GarageKeptMotors.)

“The 964 was a new 911 with classic looks” –Porsche Club of America Model Guide, Tony Callas and Tom Prine

The PCA model-resource site continued: “Porsche's 964-generation 911 made its public debut at the Paris Motor Show on September 28, 1988, and was sold starting in the 1989 model year. Though in many ways the 964 looked like a slight evolution of 911s past, Porsche in fact significantly modernized the premium, rear-engined sports car. There was no mistaking the longstanding 911 shape, yet the 964 was strikingly different. Large polyurethane front and rear bumpers were the obvious exterior styling changes. Additionally, the five-spoke Fuchs wheels that had been synonymous with the Porsche 911 were now gone....”

“Once you were past these two major styling changes, there was a lot more to take in. The 964 used a completely different chassis, fully derived from the 959 supercar.... The car was equipped with antilock brakes, coil-over suspension instead of torsion bars, and power steering for the first time in a 911, all as standard equipment. The all-new 964 housed a never-before-seen 3.6-liter air-cooled flat-six engine that made 247 horsepower, managed by a Bosch fully sequential fuel injection system with a 55-pin DME (Engine Management Computer) and much quicker processing power. This new management system was capable of bidirectional communication and fault-code diagnostics when connected to the then-new Bosch 'Hammer' diagnostic tool.”

Porsche's commitment to continued improvement of its designs and features saw a number of key changes for the 964 series including:

The 1991 911 Carrera Cabriolet offered here benefitted from all these improvements, one reason why the 964 series cars (which only appeared from 1989-1994) are so highly prized. Michigan-owned since 2005 by the principal of a local, highly respected European-automobile repair shop, this Grand Prix white-over black 964-series Cabriolet has been properly maintained over the years by its two owners since new. This properly maintained 964 just had the following service done in July of 2020:

he Carfax history shows a minor 2005 mishap when the car was inadvertently backed into a wall. Showing 100,000 miles, the car has traveled just 3,500 miles per-year on average. Porsche enthusiasts know the flat-six 911 engine will last for hundreds of thousands of miles when properly maintained.

The paper VIN/options sticker on this 911 decodes as follows:

Inside, black-leather seats are in very good condition and show no tears or holes, with only creasing appropriate for the age of the car. Dashboard instruments have clear lenses and crisp lettering and numbers with un-faded needles. The dash itself is free of cracks, with an aftermarket cd audio head installed. The shift boot has patina from age and retains its original 5-speed shift-pattern knob. Door trim is excellent with original speaker grilles in place.

The rear engine bay is clean and tidy with all components—including the air conditioning system vastly improved over earlier models—properly mounted. The “frunk” is also clean and features well-maintained carpeting. Underneath the car, there is no evidence of damage from too-aggressive driving or track use. Surface rust is minimal, and no body rust is noted, likely due to the galvanized metal panels.