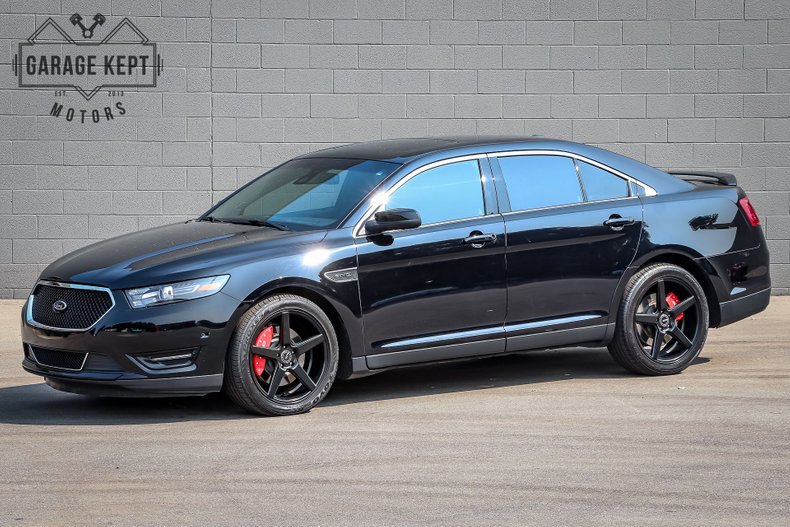 (Please note: If you happen to be viewing this 2016 Ford Taurus SHO on a website other than our GarageKeptMotors site, it's possible that you've only seen some of our many photographs of this vehicle due to third-party website limitations. To be sure you access all the more than 115 photographs, a short walk-around-and-startup video, and a link to its 2-owner Carfax report, please go to our main website: GarageKeptMotors.)

A little Taurus SHO history: “The SHO nameplate remained dormant for a decade before resurrection on the sixth-generation Taurus…. The new Taurus was a size larger than the mid-size sedan it began life as in the late 1990s, now occupying the full-size segment. It was… more technologically complex than ever before, so the new SHO needed to reflect that. …Ford's 3.5-liter EcoBoost twin-turbo V-6 provided a strong 365 hp and 350 lb-ft of torque through a six-speed automatic, an all-wheel drive was standard equipment. For a two-ton behemoth, the…SHO can hustle, with zero-to-60 taking a relatively scant 5.2 seconds onto a… top speed of 133 mph.

Offered here is a sixth (and final) generation 2016 Taurus SHO in sinister-looking black-over-black… over black (with its black KMC sport wheels). At under 24,000 miles, it is a certifiable low-mileage example, and the condition of the car in virtually every respect, reflects not only its nearly-new status, but as importantly, its adult ownership over its short life.

The exterior of the car shows no obvious flaws. (There is literally no evidence whatsoever of the light damage reported to Carfax very early in the car's life.) From its bespoke cross-hatched upper and lower front air-intakes, to its front chin spoiler, to its rear-deck spoiler, to its discreet Eco-Boost/SHO emblems, the finish is unblemished. The triple-black menacing look is broken only by the oversized SHO-branded red brake calipers front and rear. The twin chromed exhaust outlets from the MRT axle-back system deliver throaty, but subdued, engine-exhaust “musical accompaniment.” (Be sure to hear it on the short startup-and-engine-running video available at the GarageKeptMotors site.) Notably absent overall are any dings, dents, or road damage.

Inside, the SHO-embroidered logos on the front bucket seatbacks cue occupants that this stealthy Taurus is indeed special. Black leather upholstery and trim is present across-the-board with complementing textured-aluminum trim on the dual-cowl dash. The full complement of Ford's state-of-the-art user-interface technology is evident in the driver-focused, touch-sensitive information display and steering wheel-mounted controls. In the same way, the factory-installed Sony audio system with video interface and aftermarket quality has received rave online reviews. The condition of all the control surfaces in the cabin—from dash controls, to console-mounted automatic shifter, to power-seat controls, to door-mounted controls—is virtually flawless. The same is true for all soft surfaces including the upholstery, carpeting, and headliner. The cavernous trunk interior appears virtually new.

Under the hood, the twin-turbocharger 3.5-liter, 350-horsepower Eco-Boost V6 engine is prominently branded “SHO” hinting at the just-over-5-second 0-60 capability. Underneath, the condition of the surfaces mirrors that of the rest of the car. Only expected light surface rust is present on uncoated components. The twin front-to-back exhaust pipes and all other suspension and chassis components show no signs to abuse or track use. This is an adult-owned car.

The literally like-new condition of this very low-mileage Taurus SHO is faithfully presented in the more than 115 high-definition photographs, together with a short walk-around-and-startup video mentioned earlier, available at the GarageKeptMotors site. That said, there is no substitute for an in-person, up-close inspection. We encourage such inspections by interested parties at our Grand Rapids, Michigan showroom. We ask only that an appointment be made by phone or email in advance. Our showroom is not open to the public.

A New York Daily News review noted: “…the Taurus SHO is athletic, sure-footed, and confidence inspiring.” Because Ford has re-oriented its entire line to favor SUVs, the Taurus is also no longer manufactured. So add “rare” to its list of charms.