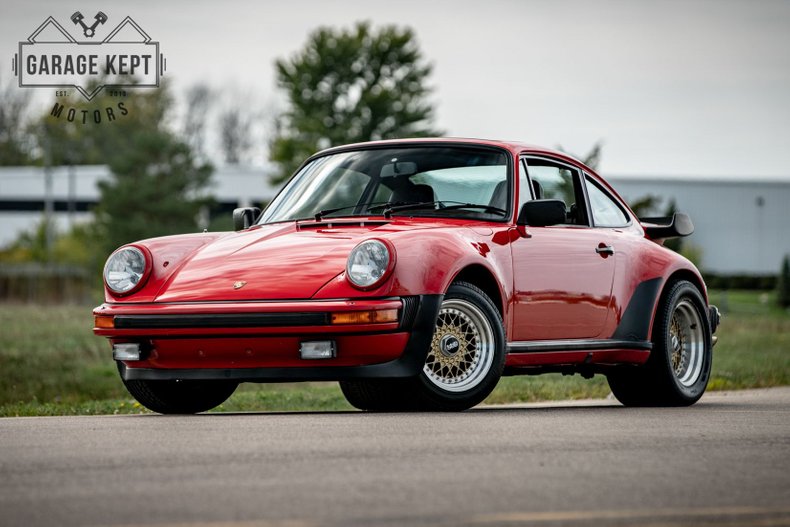 (Please note: If you happen to be viewing this 1979 Porsche 911 930 Turbo on a website other than our Garage Kept Motors site, it's possible that you've only seen some of our many photographs of this vehicle due to website limitations. To be sure you access all the more than 180 photographs, as well as a short walk-around-and-startup video, please go to our main website: GarageKeptMotors.)

“Its sheet metal bulged like Arnold Schwarzenegger's chest. Its engine had turbocharged lungs. It acceler­ated as if there were a Saturn booster strapped to its tail. It became the altar at which car nuts worshiped.…” –Rich Ceppos, Car and Driver

The car Mr. Ceppos so breathlessly described above was the Porsche 930, available in the late seventies, but withdrawn from the U.S. in 1980 due to its high price and low sales volumes. From that point on, there would only be “RoW” (or “Rest of World,” in other words, non-U.S. model) Porsche 930s. The car's remarkable performance together with its rarity made it an almost instant classic.

The Porsche 911 Turbo offered here was delivered new on December 3, 1979 by Capital Porsche-Audi to its first Ohio-based owner. For the past 20 years, it has been owned by another enthusiast. Both caretakers' pride is reflected in the superb condition of the car, unmistakable evidence of the care lavished on it. The Turbo's odometer shows 75,000 miles (or just over 1,800 miles per year on average). It's accepted wisdom among Porschephiles: Porsches need to be driven. That's why many Porsche collectors choose cars with a respectful number of miles, because it demonstrates the kind of use that doesn't allow engines to go stale or plastic and rubber parts to endure the ravages of disuse.

Outside, the Guards red single-stage paint (one of the longest running Zuffenhausen factory paint choices) retains a deep gloss free of blemishes. A good example of the owner care: The “flag style” side-view mirrors wear Porsche-logo covers to prevent stone chips. There is no evidence of body repairs or repainting. The power sunroof has no wear marks. Emblems are complete and properly located. The Turbo-only spoiler (lesser 911 cars had a different, but similar spoiler design) is in excellent condition. The staggered-width BBS gold-center wheels—a common, and expensive, upgrade for these cars back in the day—are in excellent condition, free of curb damage or discoloration, and wearing properly sized Pirelli PZero performance tires. (The car comes with the full complement of Fuchs black-center wheels it wore when new, and with the BBS wheels will give the new owner both of the two best wheel choices for this car.) Rear-side “shark fin” stone guards are properly in place and undamaged. The body is entirely free of rust or evidence of any rust repairs.

Inside, the handsome and very rare brown-leather upholstery (back in 1979, Porsche had not succumbed to the “clever-name syndrome” for its interior-color descriptions) almost shows as new. The driver's seat shows the barest minimum of wear-patina while the rear seats appear virtually unused. The brown dash is free of cracks or damage. Carpeting is well maintained and the “Turbo” script logos are present on the carpeted rear seat backs when folded. An upgraded audio head unit is installed. Even the footwell areas have been treated with care.

Underneath the rear cover, the 260-horsepower, 3.3-liter flat-six engine has received both cosmetic and performance upgrades notably including the prominent Club Carrera-branded intercooler. Be sure to take a close look in the gallery at the 1994 invoice from Specialty Motorwerks in Dayton, Ohio listing nearly $10,000 worth of maintenance and upgrades including the new intercooler. All removed parts, as well as maintenance supplies including the special oil filters required, are included in the sale.

The car's undercarriage is clean and tidy; oil lines are properly routed and free of damage or kinks. There is no sign of abuse or track use. The car's VIN stickers and engravings—showing the collector-appreciated “930” first three digits of the VIN—are in place and legible.

The condition of this rare sports car is faithfully presented in the more than 180 high-definition photographs together with a short walk-around-and-startup video available at the GarageKeptMotors site. That said, there is no substitute for an in-person, up-close inspection. We encourage such inspections by interested parties at our Grand Rapids, Michigan showroom. We ask only that an appointment be made by phone or email in advance. Our showroom is not open to the public.

The Porsche 930 was always intended for serious drivers capable of tailoring their driving style to the car's idiosyncratic handling and its astonishing power, the latter of which arrived with sudden force. “Widow maker” was a dark reference to drivers who chose poorly, or whose driving skills failed to match their appetite for speed. After all, the 930 began as a homologation model for racing, and that edge is a great part of the allure of the model for collectors. As one 930 owner put it: “They're not for little boys. There's no traction control – it's an all or nothing car.”