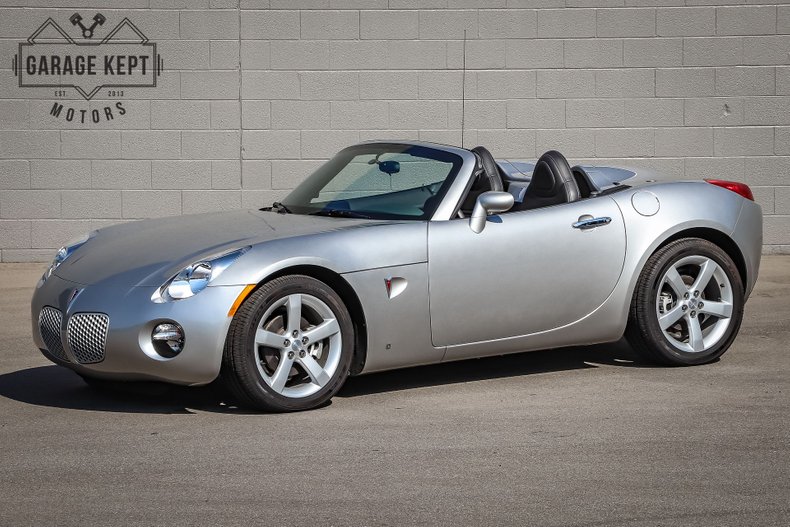 (Please note: If you happen to be viewing this 2006 Pontiac Solstice on a site other than GarageKeptMotors.com, it's possible that you've only seen some of our many photographs of this vehicle due to website limitations. To be sure you access all the more than 190 photographs, including a short walk-around-and-startup video, as well as a link to its clean, accident-free, pristine Carfax documentation, please go to our main website: GarageKeptMotors.)

The Motor Trend first-impression review went on: “The Solstice is a legit sports car just because it fits like a glove and melds with you to become one on a mountain road, despite the nearly 350 pounds it has on the new Mazda MX-5. It hunkers down into quick third-gear turns, and its tail feels like it's biting down on the back tires, the rear suspension compressing a bit. Pontiac says the Solstice will beat its competition with a maximum lateral g count of better than 0.90. Steering is light, quick, communicative, and fully up to the best moves the stiff chassis has to offer.”

Car and Driver's road testers—as impressed with the car as the Motor Trend writers—described the Solstice driving experience: “Getting up to highway speed is only a couple of redline shifts away. The 177 horsepower and 166 pound-feet of torque aren't going to smoke the tires, but there's a willingness to please that will keep you grinning.” The magazine went on to describe the handling: “…entering a corner near the limit is easy because the steering offers crisp turn-in and the wide all-season 245/40R-18 Goodyear Eagle RS-As are predictable and easy to slide around. If you do carry too much speed into a corner, understeer will rear its shuddering head, but a slight lift off the accelerator will transfer enough weight off the rear tires to cause them to slip wide, which has the effect of tucking the car back into the corner.” And finally, comfort: -“The seating position is comfortable, the seats have useful bolsters, and visibility is excellent. Gauges are borrowed from the Chevy Cobalt, and HVAC controls come from the Hummer H3. The steering offers solid on-center feel, and the ride smothers imperfections. In cruise mode, the Solstice takes on a relaxed personality--no sudden movements, no darting.”

If you're reading this and kicking yourself thinking: “Too bad I can't just go to a Pontiac dealer now and buy one brand new.” Guess what? Except for the part about the Pontiac dealer, Garage Kept Motors has your brand-new Solstice… right now!

The classic silver-over-black 2006 Solstice offered here—production-sequence number 703 of the first 1,000 made—has just 219 (not a typo) total miles on it! So, while 14 years old, this is effectively a brand-new sports car. It also happens to be identical to the Solstice that Pontiac launched on a segment of “The Apprentice,” during which none other than Donald Trump, always quick with a moniker, called it a “badster.” (Copies of correspondence from Pontiac Division verifying this story are included with the car's other launch documents.)

Not surprisingly, the exterior paint and trim are in uniformly excellent condition. The car has been treated with kid gloves and properly stored over the years. From the twin-kidney grilles, to the brushed aluminum windshield surround, to the twin-hump bodywork behind the driver and passenger, to the five-spoke wheels, all the characteristic details of the car are as-new. Underneath, the chassis surfaces are all in perfect condition, too.

Motor Trend opined: “The Solstice is a legit sports car just because it fits like a glove and melds with you to become one on a mountain road….” The car's interior features the manual five-speed transmission, to the delight of enthusiasts, the only choice in the model's first-year. The driver-focused, red-lit instrument cluster with adjacent “First 1,000” emblem, high-back bucket seats with gray stitching, and simply designed, but purposeful switchgear all speak to sport driving. The steering wheel's center-mounted Pontiac emblem serves as a reminder of the performance-oriented, storied GM division.

Under the front-hinged hood, the 2.4-liter twin cam Ecotech inline 4-cylinder engine—rated at 177 horsepower and 166 foot-pounds of torque—shows the same new condition. Because the torque in the middle of the engine's power band is high, “… you won't feel compelled to race it up to and past its 6750-rpm redline,” according to Car and Driver.

The more than 190 high-definition photographs together with the short walk-around-and-startup video available on the GarageKeptMotors site faithfully present the condition and character of this Solstice. That said, when it comes to appraising a collector car of this quality, there is no substitute for an in-person, up-close inspection. To that end, we encourage interested parties to visit our Grand Rapids, Michigan showroom to spend some time getting to know this pristine Solstice. We ask only that an advance appointment be made with us by phone or email so that we can devote our full attention to our visitors.

Car and Driver summarized their review of the 2006 Solstice calling it: “A surprisingly pure roadster.” Fourteen years after that review was written, there's the rare surprise of finding a virtually brand-new Solstice waiting for its next curator… or its first enthusiastic driver.