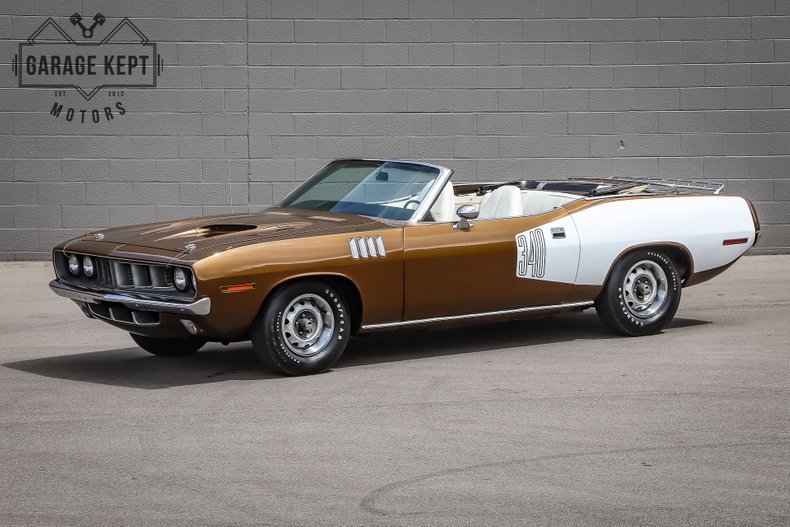 (Please note: If you happen to be viewing this 1971 Plymouth 'Cuda Convertible on a website other than our Garage Kept Motors site, it's possible that you've only seen some of our many photographs of this vehicle due to website limitations. To be sure you access all the more than 215 photographs, as well as a short walk-around-and-startup video, please go to our main website: GarageKeptMotors.)

The 1971 'Cuda was Chrysler's completely new design entry into the “pony car” segment. The company aimed to separate the model from its earlier economy-car roots. (THe original Baracuda was based on the pedestrian Valiant.) Styling was all-new with a wider, lower look and sculpted lines. Hood vents and a largely black grille gave a slightly menacing look. On the track in the AAR (All-America Racers) Series and the Trans Am Series, drivers Swede Savage and Dan Gurney campaigned the cars with a good deal of success. Many Mopar fans place these 'Cudas at the very top of their most-desired Chrysler performance cars want-list.

The 340 cubic-inch, 275-horsepower V8 was another part of this model's appeal. As Hemmings ran it down: “… there was one other 'Cuda engine option: the 340. This was the high-performance version of Chrysler's LA-series of small-block V-8 engines, first introduced for the 1968 model year.” They added: “That the 340 was treated as an option was a bit odd, since it had smaller displacement and a lower power rating than the 'big-block' 383, but that arrangement supported the notion that the 340 was more of a precision instrument than the 383's big-hammer approach. Buyers took note, and consciously selected the 340 often enough that it actually outsold the 335-hp 383.”

Offered here is a rare and beautifully equipped survivor 340 'Cuda Convertible from 1971. Its condition is unrestored with 93,000 miles showing on the odometer, but the exceptional care the car has received over its nearly fifty-year life has resulted in a near-perfect presentation of this legendary marque.

The exterior Tawny Gold Metallic paint (an almost copper shade) is contrasted with the white “billboard” graphic “340” on the car's rear flanks, as well as by a white convertible top. Overall, the paint shines beautifully and there are no noticeable dings or dents on the body. Panel-gaps are consistent. The very restrained use of chrome trim is another feature of these E-Series cars, and in this case the trim and badging is all in excellent condition. Functional hood pins flank the twin hood air-intake scoops, and are secured with cables. The rear deck sports a luggage carrier. Windshield glass and lighting lenses are crack-free and clear. Styled-steel wheels with chrome trim wings wear F70-14 Goodyear Polyglas raised-white-letter radial tires.

Inside, the white accents from the exterior take over with white vinyl on both the high-back front buckets and rear bench seat. Door trim continues the white theme, while dark-chocolate carpeting and black upper-dash trim complete the period look. The door sills and step-over areas are remarkably free of wear, yet another indicator of everyday owner care. Wood veneer tastefully graces the dashboard and center console surrounding the t-shifter for the TorqueFlite 3-speed automatic transmission. The driver-focused dash features four large instrument enclosures including one for the 6500-rpm-redline tachometer and another for the 150-mph speedometer. Switches include one for the electrically operated convertible top. A “Chrysler Solid State” AM push-button radio is dash-mounted on the driver's side.

Under the hood, the original 340 cubic-inch engine, resplendent in its Chrysler-orange block under a matching black-and-orange air cleaner adorned with a bold “340 Four Barrel” graphic, is the star. All associated components are present and properly located, and the entire engine compartment is well detailed. A hidden show-stealer lies in the condition of the car's undercarriage. Many 10,000-mile cars don't look this clean. Surface rust is minimal, and there is no evidence of any body-panel rust.

Together with the short walk-around-and startup video available at the GarageKeptMotors site, the more than 215 high-definition photographs of the car, taken from every angle including from underneath, faithfully present the 'Cuda's condition and completeness. That said, nothing can take the place of an in-person, close-up inspection. To that end, we encourage and expect interested parties to visit our Grand Rapids, Michigan showroom to take a good look at this classic car. We ask only that appointments for such visits be made in advance by phone or email. That way we can devote our full attention to the visitors and the car.

Clearly, this 340 'Cuda is a terrific representative of a time in the American auto business the likes of which we'll never see again. As such, its next owner can expect to regularly be greeted with admirers and longing stares. The car is that good.