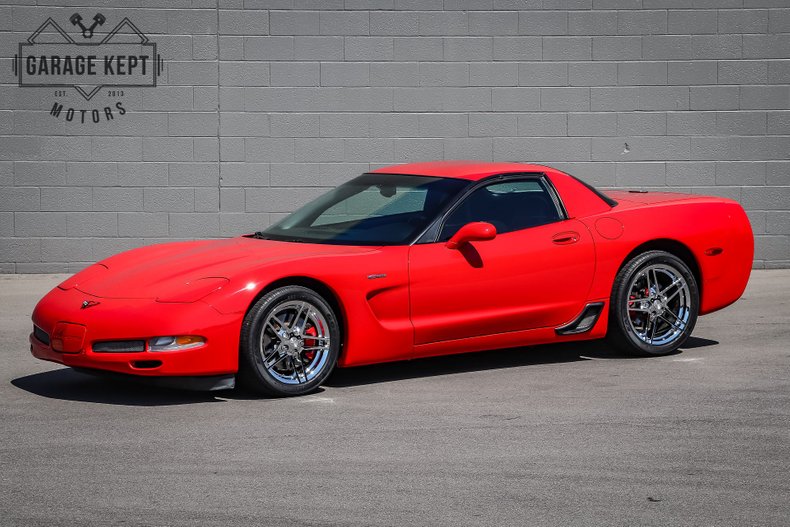 
(Please note: If you happen to be viewing this 2001 Chevrolet Corvette Z06 on a site other than GarageKeptMotors.com, it's possible that you've only seen some of our many photographs of this vehicle due to website limitations. To be sure you access all the more than 135 photographs including a short walk-around-and-startup video, as well as a link to its Carfax documentation, please go to our main website: GarageKeptMotors.)

In 2001, Chevrolet resurrected the Z06 moniker originally used to denote the Stingrays first equipped for SCCA racing in 1963. Enhanced, track-worthy performance was the theme—and the reality—then and now. Although it's a bit long-winded, the Hemmings reviewer cited above went on to catalog exactly what made a Z06, a Z06. Even for Corvette aficionados already familiar with all of this, the next three paragraphs may still be an enjoyable read:

“Beginning with the stiffest variant in the Corvette model lineup, the Fixed Roof Coupe (FRC), engineers went to work shaving weight wherever they could. Thinner glass was used, and sound deadening was kept to a minimum. The exhaust system was made of titanium…and a lightweight battery and fixed antenna were fitted. Though wider wheels… were standard, the use of conventional Goodyear Eagle F1 tires (instead of run-flats) saved a total of 23 pounds in un-sprung weight.”

“Power came from a revised version of the 350-hp LS1 V-8… the LS6. Starting with the same 5.7-liter block, the LS6 received a redesigned intake manifold, revised cylinder heads with smoother intake and exhaust ports, a higher compression ratio (10.5:1 compared to 10.1:1 on LS1), revised exhaust manifolds, a revised camshaft, different valve springs, and stronger pistons. Torque went to the ground through a stouter clutch, a six-speed gearbox with unique ratios for quicker acceleration, a larger aluminum drive shaft, and a strengthened rear axle with a shot-peened ring gear.”

“Output on the LS6 was raised to 385 horsepower…. the Z06 was 87 pounds lighter than the ZR-1, it matched or exceeded the latter's performance in every area except top speed, which, at 168 mph, fell 7 mph short. Car and Driver measured a 0-60 mph time of 4.3 seconds on the 2001 Z06, en route to a quarter mile in 12.7 seconds at 113 mph. Cornering ability was equally impressive, thanks to the Z06's FE4 suspension. In addition to the aforementioned wider wheels and lighter tires, this included a larger tubular front anti-roll bar, a stiffer transverse rear leaf spring and a revised front and rear camber adjustment. As a result, the Z06 was capable of pulling 0.98 g in a corner, a feat which then ranked it among the world's best-handling cars.”

The condition of the car is outstanding throughout. From the red Z06-embroidery on the seat backs, to the full analog instruments; from a pristine engine compartment with its red valve covers to the quad exhaust exits; literally from top to bottom, this car shows beautifully. Its Carfax record lists no accidents or other damage. The more than 135 high-definition photographs available on the GarageKeptMotors site show the Corvette from virtually every angle, including from underneath, and attest to exemplary owner care and responsible use through the years. Be sure to watch the short walk-around-and-startup video not only to see the condition of the Torch-red paint and interior surfaces, but also to hear the V8's exhaust note.

We encourage and expect in-person visits to our Grand Rapids, Michigan showroom to see and inspect the car up close. We ask only that you get in touch by phone or email in advance to arrange an appointment so we can devote our full attention to you while you're with us. Feel free to get in touch as well with any questions.

Back in 2001, MotorWeek concluded its gushing review of the Z06 saying simply: “The Z06 is a knock-out package. One that's exciting and usable.” Before long, the next owner of this Torch red example will be searching for their own words to praise this legendary Corvette.