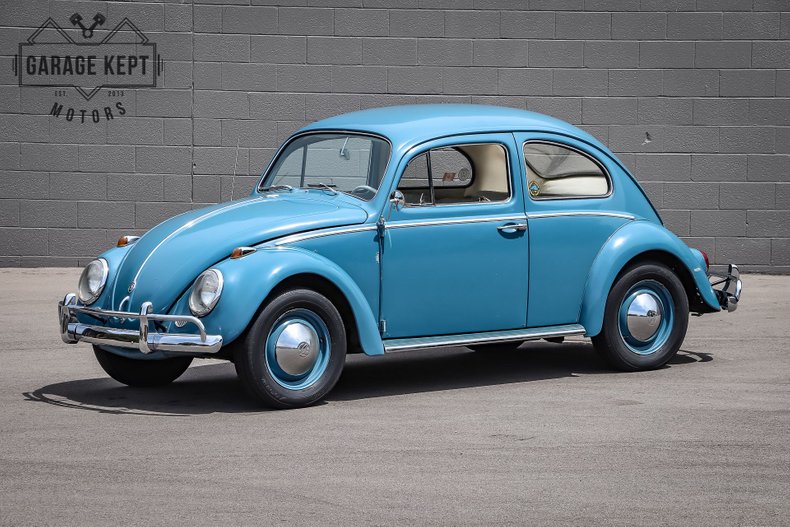 
(Please note: If you happen to be viewing this 1962 Volkswagen Beetle on a site other than GarageKeptMotors.com, it's possible that you've only seen some of our many photographs of this vehicle due to website limitations. To be sure you access all the more than 100 high-definition photos, including a short walk-around-and-startup video, please go to our main website: GarageKeptMotors.)

Touting its revolutionary decision not to dramatically change a model's appearance just to introduce a different-looking version every fall, Volkswagen instead touted how frequently the company made improvements to the car's mechanicals throughout the year: “People sometimes ask us why we don't change our cars once a year like everybody else. The answer is simple: once a year isn't always enough.”

The VW Beetle's extremely long-lived appearance is part of what has the early models still in demand nearly sixty years after they first came ashore in the U.S. Purity of the design, simplicity of the engineering, and plain old nostalgia seemingly ensure demand for these classic German automobiles will never die out. Properly maintained, the cars are not only timeless, they're eternal!

The blue '62 model here is a good example. Originally sold in California and owned for years by the same gentleman, it was subsequently acquired by a VW collector and treated to an engine and transmission rebuild in 2015 (with the piston size increased making it a 1300cc motor, not 1200cc as it came from the factory). Re-sprayed once many years ago, the car's exterior is otherwise unchanged. And the interior upholstery is similarly original, and wears the “patina” of worn seat upholstery (especially the driver's seat) proudly. As the collector-car adage goes, “They're only original once.”

For its 58 years on the planet, this blue bug shows quite well. Outside, there's a minor scrape on the left-rear fender, but no significant dents or other injuries are apparent. The 60,000 miles it's traveled (considered low for a four year-old car, much less a 58 year-old) have apparently been accident-free courtesy of adult ownership and careful use. Maybe most of all, as an original California car, there is no appreciable rust. Body panels are straight and retain their factory alignment. The medium sea-blue paint is consistent overall. Even the car's body-color-painted steel wheels and original chrome VW-branded hubcaps remain in excellent condition. Bumper chrome (including the front and rear “override bars”) and trim is similarly well kept, as is window glass and both headlight and taillight lenses. The Wolfsburg hood insignia is sharp-as-new.

Inside, the characteristically simple dash with large center speedometer augmented by a single gauge to keep track of fuel level appears to retain its factory-applied paint. The 4-speed manual shifter knob is correct while the floor-mounted cupholder surround piece is an aftermarket convenience. The VW Wolfsburg emblem (celebrating the northern German city of its manufacture) is crisp and undamaged. As noted earlier, there is significant wear on the driver's seat with less evidence of wear on the other seating surfaces, all of which sport their factory-installed upholstery. Headliner wear is minimal, and the forward parcel net is in place. Inside the tidy and correct front trunk, there's a full-size spare in the “sideways” position adding a measure of frontal crash-protection. The 1300cc flat-four rear engine compartment is similarly clean, complete, and well cared-for. Be sure to check out the startup-and-walk-around video at the GarageKeptMotors site to sample the sound of the properly maintained and lightly upgraded engine.

We encourage in-person inspections of this lovely early Beetle. With an advance appointment, you are welcome to visit our Grand Rapids, Michigan showroom. Our showroom is not open to the public, so your appointment helps ensure you have our attention during your visit.

Will a well-maintained, largely original early Beetle ever lose its collector appeal? Who can say… but it hasn't happened yet!