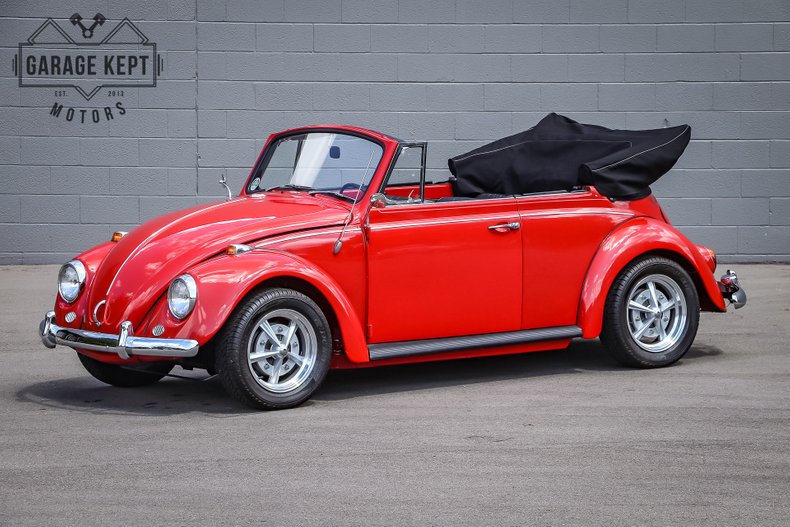 (Please note: If you happen to be viewing this 1967 Volkswagen Beetle Convertible on a site other than GarageKeptMotors.com, it's possible that you've only seen some of our many photographs of this vehicle due to website limitations. To be sure you access all the more than 125 photographs, including a short walk-around-and-startup video, please go to our main website: GarageKeptMotors.)

“Is it true that every 1967 homecoming queen rode in a Beetle convertible in the parade that year? Probably not, but pretty girls sure looked good in those cars!” –Retired advertising executive

Unless the homecoming queen happened to be in Europe that year, chances are she wasn't riding in this particular red Beetle Convertible; it was still in Germany. Delivered over there, and then only sometime later returned to the States by its first owner, this is a Euro-market example of a highly desirable '67 Beetle Convertible. The Euro variants like this one had no “override” bumpers, but did feature the dash pad that was unavailable in the U.S. (They also had provisions for either right-hand or left-hand drive.) Regardless, this lovely red-over-black Beetle Convertible is a beautiful example of the “homecoming queen's” parade ride.

Purchased in Detroit by its current owner in 2009, the car is in exceptional original condition. One of just 6,349 convertibles (or roughly 2%) out of a total of 320,692 Beetles manufactured and imported to the U.S. that year, this is a rare automobile by any standard. The car was professionally and comprehensively restored in 2015 when its rust-free body underwent a wet-sanding, so the paint shows beautifully inside and out. The car has traveled a mere 500 miles since the restoration. Adding to its appeal, the 1967 model-year cars were the first Beetles to be equipped with the 12-volt electrical system and the larger, 1600cc single-port, horizontal-4-cylinder engine which increased horsepower to an impressive (!) 53. Be sure to watch the short walk-around-and-startup video at the GarageKeptMotors site to hear all those horses fired up.

The benefits of the car's restoration are obvious in its exterior paint. Uniformly shiny throughout, red is a “fun color” that nicely captures the California-drop-top vibe this model was known for. Body panels are straight and properly aligned. Chrome trim—including the bumpers, hood handle, radio antenna, body trim, and emblems—is all in excellent condition. Aftermarket five-spoke wheels are attractive and similarly well maintained. (Included in the sale are the car's original wheels and hubcaps, as well as its factory-original set of owner's manuals, and a complete BMPI tool kit.) The black-fabric convertible top is also in excellent condition, and nicely matches the car's upholstery color.

The car's interior is just as nice as the exterior. The simple, body-color-painted metal dash is virtually flawless. The large center-positioned speedometer is the sole round instrument with only a small square-ish fuel gauge alongside, and the dash-mounted “All transistor” push-button AM radio in the center position. The Wolfsburg-logo steering wheel in black is a similar study in elegant simplicity, as is a wood knob showing the 4-speed shift pattern. All the interior textured black vinyl upholstery shows virtually no signs of wear. Both the front trunk and rear engine compartment are clean and tidy with everything in its proper place. From underneath, the car is every bit as immaculate and impressive as it is from above.

A car of this caliber deserves an in-person inspection by any prospective purchaser. You are most welcome to visit our Grand Rapids, Michigan showroom for that purpose. We ask only that you get in touch in advance for an appointment so that we can devote our attention to giving you a complete tour of this Beetle Convertible.

In one of the classic 1960's VW ads, the advertising people put the appeal of these special drop-top cars this way: “Many people don't need practical benefits. They simply like our top. They like it because it's padded, stitched, and fitted by hand, so it's weatherproof and actually cushions sound. They like our top when it's up for its smooth custom-made look. And they like it when it's down for its unusual way-out look. To many people, our top is so way-out, it's in.”

Give us a call if you're ready to get in with the Beetle Convertible in-crowd.