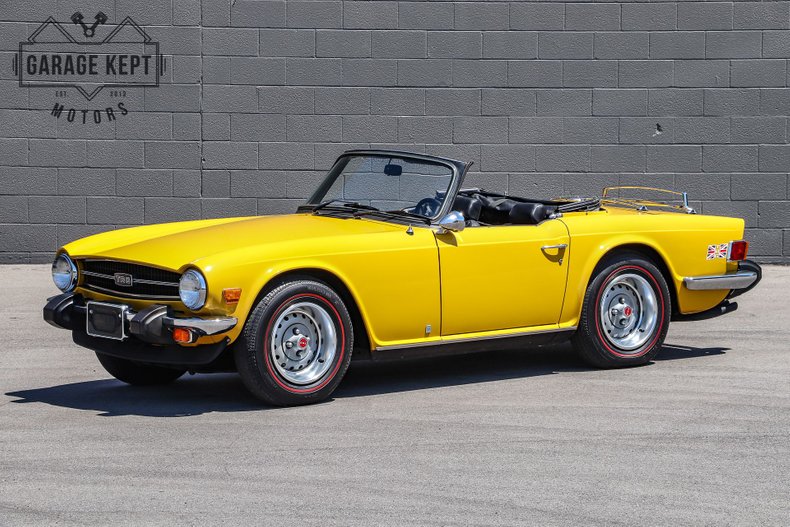 (Please note: If you happen to be viewing this 1976 Triumph TR6 on a site other than GarageKeptMotors.com, it's possible that you've only seen some of our many photographs of this vehicle due to website limitations. To be sure you access all the more than 205 photographs, including a short walk-around-and-startup video, please go to our main website: GarageKeptMotors.)

The Petrolicious quote above is just one of many endorsements of the Triumph TR6 from the automotive press. Here's another, from Hemmings Motor News in 2006: “Although most cars require years of collective nostalgic reflection to earn collectible status, the Triumph TR6 was considered a modern classic throughout its entire 1969 to 1976 production run, a distinction that it still holds today.”

The TR6 was, and still is, a definitive statement of the post-WWII British sports car. In the 40s, American GIs had fallen in love with the 2-seat MGs, Austin Healys, and Jaguars they discovered when they landed in England. The open-air, lightweight, sports cars were unlike anything they'd left behind in the states. Piloting these quick, floor-shifted, fun automobiles along the country lanes and the cobblestones of narrow city streets was addictive. When the war ended, it wasn't long before the demand for the cars erupted in America where no domestic model at the time came close to matching “the British sports car feel.” That allure still holds today, and the TR6 is a popular choice for delivering those period thrills in a solidly built, reliable, easy-to-maintain automobile.

The particular looks of the TR6 versus earlier TR models help make these later cars more desirable. Commenting on the updated body design and best-of-both-worlds result, Hemmings noted: “A clever and comprehensive facelift by the Karmann works in West Germany… altered the front and rear ends of the TR4 design, reshaping them in a squarer, more integrated styling theme. The resulting TR6 was a car that looked wider and very modern, yet aside from varying seat designs, its passenger compartment, inner stampings and mechanicals were virtually unchanged.”

Offered here in the very appealing and highly desirable combination of Inca yellow over black leather is an exceptional-condition TR6 with reportedly just over 2,000 total miles. The 1976 cars represented the end of the model's seven-year production run. Delivered new in Jacksonville, Florida, this yellow stunner is one of a total of just 6,083 TR6s assembled in 1976. A large amount of documentation—including original owner's literature, original window sticker, maintenance records are included with the car. Most notably, a British Motor Industry Heritage Certificate (specifying a build date of June 6, 1976 and showing the original owner's names; it even includes the name of the ship that brought the car to the U.S.!)—is also included in an impressive 3-ring binder historical file. In all, this is obviously a rare opportunity for the serious collector..

From its large front chin spoiler, to the angled Union Jack/TR6 appliques on its rear fenders, the car shows beautifully; it begs to be driven. Top-down or top-up, the car's sportiness is evident in its styled steel wheels, red-stripe tires, blacked-out rear fascia, signature low profile and wide stance, rear-deck fuel filler cap, dual exhaust pipes, and of course, its two-seat arrangement. From behind the steering wheel, nothing compares to a TR6. The solid wood dash (including the glove-box door), driver-centric, full Smiths gauge arrangement, Triumph-branded 4-speed shifter, and close-quarters seating with ventilated leather upholstery are true to the British definition of sports car. The original AM FM radio ensures enjoyable entertainment on any trip. With the included body-color hardtop, those trips will be comfortable even in inclement weather.

The car's front-hinged hood opens to reveal a tidy and complete compartment showcasing the 2.5-liter straight-six engine with its twin, side-mounted carburetors producing 101 horsepower, and capable of propelling the car to a top speed of 109 mph. Hemmings commented on the resulting performance of the engine saying its “…throaty exhaust note and torquey demeanor offered the illusion of great speed.” Befitting its collector quality, all data tags and factory stickers are in place.

Underneath the car, there is surface rust from limited use as commonly found among similar-age TR6 models. There is no evidence whatsoever of body-panel rust. We encourage in-person inspections of this TR6 at our Grand Rapids, Michigan showroom. Please get in touch for an appointment, and feel free to email or call us with any questions you might have.

This true collector-quality British sports car can live a two-edged life: on the one hand, it can be be driven on everything from in-town jaunts, to cars-and-coffee meet-ups, to longer, open-air excursions (especially in the fall); on the other, with continued attention, it would certainly be eligible for concours judging.

Most TR6 owners delight in tinkering with their car's stout mechanicals, and they applaud the extensive array of reasonably priced available parts and the mechanical expertise of fellow owners and enthusiasts in numerous online forums. For example, pretty much every proud TR6 owner admits to being unable to pass their car in the garage or driveway--or the concours lawn--without giving it an admiring glance. As a standout example of the last model year, this one definitely got lots of that kind of care throughout its life. And it's sure to continue with a proud and fortunate new owner.