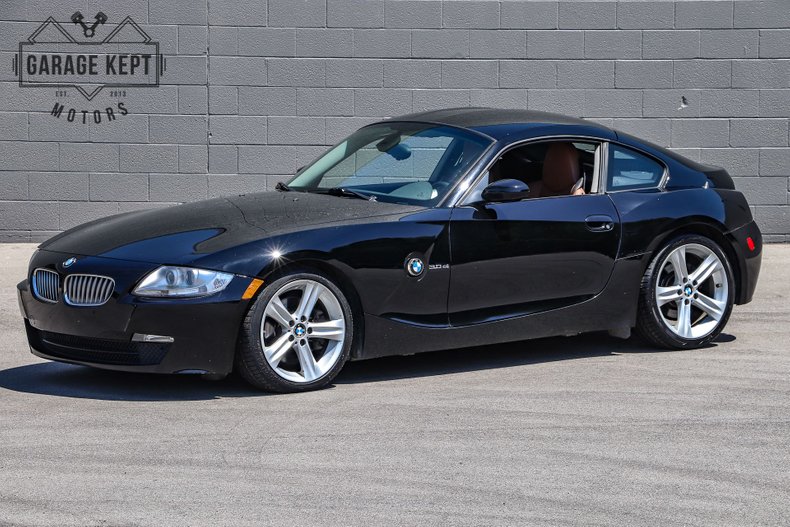 (Please note: If you happen to be viewing this 2007 BMW Z4 Coupe 3.0SI on a site other than GarageKeptMotors.com, it's possible that you've only seen some of our many photographs of this vehicle due to website limitations. To be sure you access all the more than 150 photographs including a short walk-around-and-startup video, as well as a link to the Carfax report, please go to our main website: GarageKeptMotors.)

That review headline proved to be prophetic as the Z4 is no longer built having been superseded by the Z5. Some will be put off by the “dying breed” shot, but car enthusiasts know only too well that it commonly flags cars that retain their special character and appeal to enthusiasts long after they're gone. Think Cobra, Bronco, XKE, or even Dino.

Nostalgia may play a role, but it's not the prime reason cars of this sort retain value. Their lasting appeal lies in the way they answered the enthusiast's wishes back in the day. For example, referring to the Z4 as “the darling of the 2005 Frankfurt auto show” before its launch, here's some of what Car and Driver had to say about the Z4 Coupe under their headline “One hot tin roof.”

“Coupes are supposed to be fascinating. BMW's new Z4 3.0si coupe is certainly that, grabbing your attention with a sloping, double-bubble roof that tapers to the rear like a teardrop in the wind,” and, “Under the 3.0si's immense hood is BMW's familiar N52 inline-six, of 2996cc displacement, variable intake valve lift, and variable intake and exhaust valve timing. This is from the same engine family as that found in the 3-series sedan, with its novel magnesium-and-aluminum hybrid block casting. The engine makes incredibly smooth power through a slick-shifting six-speed manual or a six-speed automatic.”

Offered here is a very well maintained example of this sport-tourer. Rich black paint is nicely contrasted by Camel leather on the two sport seats and door trim. The car's condition--as shown in the more than 150 photographs taken from virtually every angle (including from below), and the short walk-around-startup video available at the GarageKeptMotors.com site--is exemplary. There are some visual keys that are worth checking to help separate the good cars from the excellent. Does the front valence show signs of overly aggressive driving or track use? How tidy is the interior in the footwells, especially on the driver's side? Are the instrument controls and wood trim “tired” looking from careless use? Take a look at those areas on this Z4 Coupe and decide for yourself.

Another telling indicator is a car's mileage. This limited production Z4 has accumulated just 6,700 miles per year since new, roughly half of what's considered average use. The car was definitely special to its owners and likely never played the role of a daily driver. To fully appreciate this BMW and its fine condition, we encourage in-person inspections by appointment at our Grand Rapids, Michigan showroom.

From the jewel-like placement of its side-market lights behind the BMW roundel badge, to the flowing design of the body panels, to the handsome and extensive use of dark-walnut trim inside, this Z4 displays the many special touches that excite the enthusiast. That it is one of just 1,280 coupes built adds another layer of desirability.

This is a pretty rare opportunity to eschew the “dying” part to own and thoroughly enjoy“the last of the breed.”