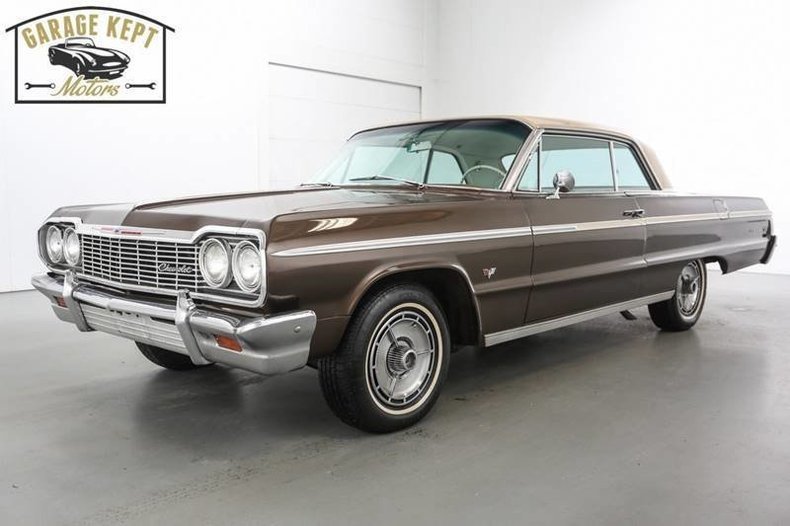 Offered here is a true 1964 Chevrolet Impala Super Sport 2-Door Hardtop Coupe. This car was originally purchased in Alabama, spent some time in Utah, and then made its way to a Muskegon, Michigan Chevrolet dealer in 1987. The car was a fixture in his collection for 20 years until our client purchased the car in 2007. From 2007 to 2008, the car went through a complete restoration with two-tone Brown Metallic/Beige paint professionally done at APS Performance, also in Muskegon. The SS also had new carpet installed, seats recovered, new headliner, LED taillights, and a retro fit AC unit converted to R32, which works great. This was a factory AC car. Power-wise, the car rolled off the assembly line with the L30 327ci/250hp 4bbl V8 engine, which had been replaced by a newer 1967 327ci when our client bought it. He pulled that engine and replaced it with a rebuilt 1978 350ci/260hp V8 Impala engine and mated it to a 350 automatic transmission. As you can see/hear in the video, the car runs extremely well and sounds great. It drives equally as smooth. These 1964 Impala's Super Sports have been climbing in collectability to the point where Hagerty values a number 3 (daily driver) car at $37,000, which this car is certainly worthy of. Concours examples reach as high as $78,000! This is an incredible deal at the price offered here. All the work has been done. Simply turn the key and go. Call or e-mail if interested. Be sure to check out all the photos and video on our main website. Thank you for looking. VIN Decoder:4 – Year: 196414 – Series: Impala SS V847 – Body Style: 2-Door Sport CoupeA – Assembly Plant: Baltimore, MD117188 – Production Sequence