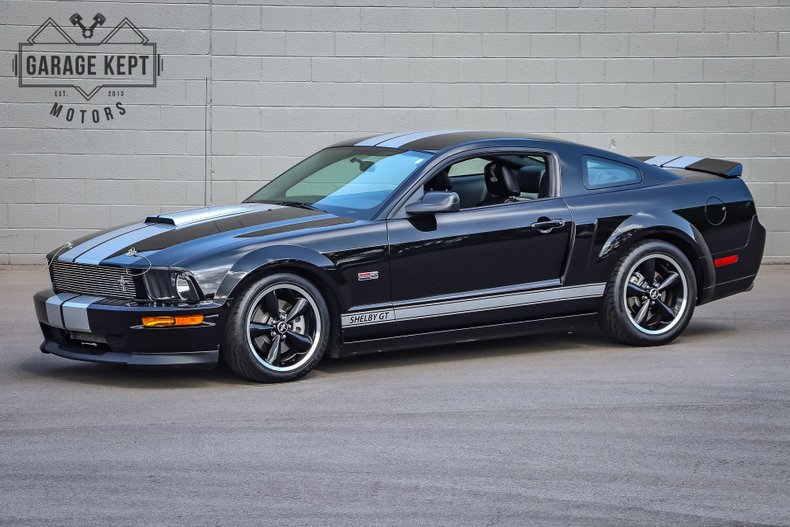 This one owner Shelby GT is an awesome way to get into a performance Ford without spending GT500 money. This car started life as a well optioned Mustang GT with a sticker price of just over $30k in 2007. In the Ford Mustang lineup, the Shelby GT slots in between a Mustang GT and a Shelby GT500. However, this Shelby GT does have a Paxton Supercharger added to the V8, much like the setup a GT500 has under the hood from the factory. A one owner, supercharged Shelby Mustang with low mileage - what's not to like?!

These Mustangs were actually modified by Shelby American after a new Mustang GT from Ford's Flat Rock Michigan assembly plant arrives at their facility in LasVegas. The Mustang GT's go through a $10k transformation at Shelby to become Shelby GT's. The cars have Shelby serial numbers, and this car carries number “07SGT3374” of 6,000. Our client purchased the car new from a local Ford dealership, and shortly after purchase had the supercharger added.

As you would expect, under the hood is where all the fun starts. Once the hood pins are out of the way and the hood is opened, a quick glance at the engine bay reveals a large aluminum Paxton Supercharger and chargecooler. Those are mounted toward the front of the engine along with an air intake. Between the strut towers is a black strut tower bar to add some cornering stiffness to the car. The Shelby GT cars get a 19 horsepower gain over a GT thanks to a revised tune, air intake, and a high flow exhaust. The Paxton Supercharger is a bonus added by our client, which results in even more power. Other modifications carried out by Shelby are that the cars sit 1.5” lower thanks to stiffer springs and upgraded shocks, and anti-roll bars front and rear are added.

The exterior is finished in Black with silver metallic stripes. A hood scoop is reminiscent of the classic GT350 cars, an aluminum grille, 'Shelby GT' decals and side stripes, and Shelby lettering are all exterior details added to the car by Shelby. Since this car started as a Mustang GT package, this car had 18” alloy wheels, leather trim, and dual exhaust before Shelby got their hands on it.

Inside the car leather trimmed seats, an upgraded stereo, and Hurst shifter are notable details. This Shelby GT is a lot of car for the money. A performance car that bears the Shelby name assures you that it is no slouch, this one owner car has lots to offer in a limited edition package. Be sure to check out all the photos and video on our main website: Garage Kept Motors. Call if interested or e-mail with any questions. Thank you for looking.