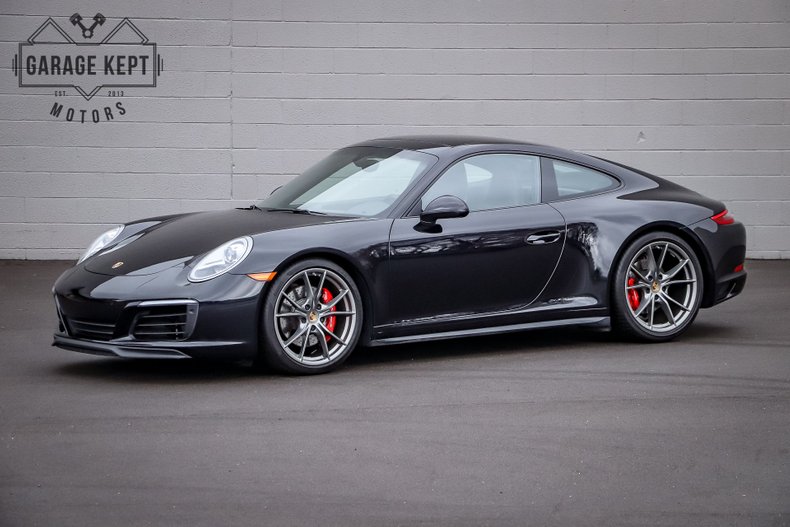 (Please note: If you happen to be viewing this 2017 Porsche 911 Carrera 4S Coupe on a website other than our Garage Kept Motors site, it's possible that you've only seen some of our many photographs of this vehicle due to website limitations. To be sure you access all the more than 180 photographs, as well as a short start-up and walk-around video, please go to our main website: Garage Kept Motors.)

In late 2016, Martin Padgett's “Motor Authority” internet site dispatched writer Kirk Bell for a “second drive” review of the then brand new 2017 Porsche Carrera 911 4S Coupe. The long review of a PDK-equipped model concluded with the above quote. What follows are excerpts of his notes from the entire review: “… Porsche has updated the 991 generation of the 911, adding turbochargers to the base and S models. … new so-called 991.2 generation 911 features two new twin-turbocharged flat sixes… base version displaces 3.0 liters and puts out 370 horsepower and 331 pound-feet of torque. … increases of 20 and 44, respectively. … in S models the displacement is the same but the output is up to 420 hp and 368 lb-ft of torque, increases of 20 and 43… Would turbo lag be a problem? What about the sound?… it soon became apparent that my fears were misguided. … the new turbo (not to be confused with Turbo) engines are better than the naturally aspirated engines they replace… the 420-hp engine in the 4S retains all the character of the outgoing engine, but adds a bit more power and a lot more low-end torque. … the 0-60 mph run takes just 3.7 seconds, and the top speed is up from 188 to 191 mph. In the all-wheel-drive 4S model I drove, the added traction drops the 0-60 run by another tenth. At its fastest, it's three tenths quicker than the outgoing 3.8-liter flat-6. … I sensed no turbo lag and felt a bigger kick in the pants off the line.”

Bell went on to describe the ride as “firm but not harsh,” and he wondered how Porsche was able to make the 305/30R20 tires soak up the bumps so well. He also praised the dramatic upgrade in the car's PCM infotainment system with improved touch functions, Google Maps, and Apple CarPlay features. And as noted above, in the end, his own choice would be for the 7-speed manual transmission car.

Resplendent in its Jet Black paint-over-black leather, offered here is just such a 911. A true, properly equipped, “driver's 911.” Most important, the car has amassed only a minimal 8,200 miles, and from its pristine condition throughout, it has been properly driven and properly cared for. At a price discount of approximately 22% versus new, it also represents a value for the Porsche enthusiast.

Noteworthy among its options are the Sport Exhaust system, Sport Chrono Package, and Bose sound system. The car's original factory window sticker, shown among the more than 180 high-definition photographs available at the GarageKeptMotors site, is the best documentation of all the features and options on this 991.2 example. Also included at the site is a short startup video with a sampling of the beguiling flat-six engine note recorded at the dual, rear center-located exhaust. Of course, an automobile of this caliber deserves an in-person inspection and we are happy to arrange one by appointment at our Grand Rapids, Michigan showroom.

Every Porsche is special in its own way, but a 911 in black-over-black is simply classic. This Carrera 4S is no different in that regard. Adding a measure of uniqueness, its first owner ordered the car with only the “911” badging on the rear deck, eschewing the longer model description for reasons of personal taste, modesty, or quite possibly, stealthiness. Regardless, this may well be the only 911 C4S in these colors so produced.

As the photographs show, every interior surface, every body panel, every inch of glass, every lighting lens shows in as-new condition. The car is free of any obvious wear indications anywhere. Every feature—standard and optional—works as intended. The car's undercarriage (including the engine) barely shows evidence of use, with absolutely no sign of damage or an inconsiderate driving style. The Carfax record indicates two owners; however, it is the same owner that bought the car in NC and then brought it to IL. No accidents, smoker free, and an appropriate dealer-performed-service history.

In another review, the automotive-oriented site “Slash Gear” concluded: “…the now-turbocharged Carrera is certainly one of the most advanced, and fastest cars to ever serve as the first rung on the 911 ladder.” The next owner of this exceptional sports car will almost certainly be a true enthusiast, and a dedicated Porsche driver. Please call or email with any questions. Thank you for looking.