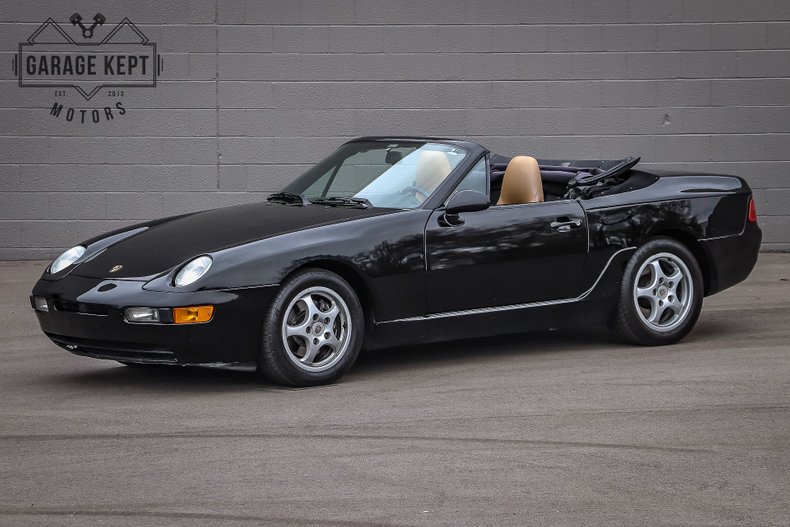 (Please note: If you happen to be viewing this 1994 Porsche 968 Cabriolet on a website other than our Garage Kept Motors site, it's possible that you've only seen some of our many photographs of this vehicle due to website limitations. To be sure you access all the more than 175 photographs, as well as a short start-up and walk-around video, please go to our main website: Garage Kept Motors.)

“The zenith of Porsche's long running front-engined, four-cylinder 924/944 series culminated with the 968.” - Hagerty

The Hagerty website goes on to celebrate this Porsche: “The…968 was wrapped in new bodywork that was the product of original 924 designer Harm Lagaay, with updated styling that drew from the 928 at the front, and was more integrated than its 924/944 predecessor at the rear. Like the 944S2, the 968 was also available as a cabriolet with a neatly done power top. On the performance side, the 968 could rip off a 0-60 sprint of 5.6 seconds with a 156-mph top speed.... Handling was very forgiving, confidence inspiring, and predictable….” And: “The 968 has proven to be reliable as well....”

The 968 offered here is one of just 668 such cabriolets shipped to North America in 1994. With only 19% of these being equipped with the Tiptronic, 4-speed, shiftable-automatic transmission, this is a relatively rare sports car. At just over 73,000 miles currently (under 3,000 miles per-year on average), this is a lightly used example that likely never served as a daily-driver. Originally sold in Illinois, the car spent most of its life in north-suburban Milwaukee. An accident in 2004 is shown on the Carfax resulting in “moderate damage,” but no location of said damage is provided. A recent careful inspection could locate no obvious repair, paint damage, or bodywork. Still, we encourage prospective buyers to inspect the car in person at our Grand Rapids, Michigan location by appointment.

The car came from Porsche's historic Zuffenhausen factory (not the Neckarsulm facility where the 944 cars originated), equipped as follows:

17-inch “Cup” alloy wheels were standard, as were pop-up headlights (which “reclined” to fender height), and an inflatable spare tire. The car's power-operated convertible top was a significant improvement from the manual unit that had appeared on the earlier 944 S2 models.

The condition of the exterior of this 968 indicates a history of owner care. The black paint displays near-original gloss unmarred by sun damage or inattentive polishing. The window glass, lighting lenses, and emblems are all in excellent condition. The Cup wheels are in excellent condition, with the exception of the right-rear which shows some road rash from parking. Underneath, the car is clean and complete displaying only light surface rust on some components, but no body rust. Similarly, the engine compartment displays the 3-liter, inline 4-cylinder featuring Porsche's Variocam (variable valve-timing), clean and well ordered.

Inside, this car shows another of its distinctive points: The 968 Cabriolet is the last of Porsche's two-seat, front-engine sports cars. Behind the front bucket seats are only a parcel shelf and lockable stowage compartments. There is, however, a surprisingly ample (for a convertible) and well appointed trunk, perfect for extended road-tripping. The partial-leather upholstery is beautifully rendered in cashmere with cashmere-and-black dash and related trim (a true “black & tan” example). Similar to the exterior, all interior surfaces display exceptional owner care and absence of abuse or other obvious damage. A replacement Blaupunkt “Indianapolis” CD audio head unit is in place. Porsche-branded carpet mats protect the factory carpeting.

We encourage a careful look at the more than 175 high-definition photographs of this car available on the GarageKeptMotors website. Also at the site is a short start-up and walk-around video offering a sampling of the 3-liter engine's purr. We also invite in-person inspections of the car at our Grand Rapids, Michigan showroom by appointment.

A car that offers a top-down, wind-in-your-hair Porsche driving experience, absent the need for frequent manual shifting, is special and rare indeed. Not every Porsche fanatic will be drawn to it, but that's okay. Porsche fanatics rarely agree on everything anyway!

Thanks for looking. Please call or email if interested.