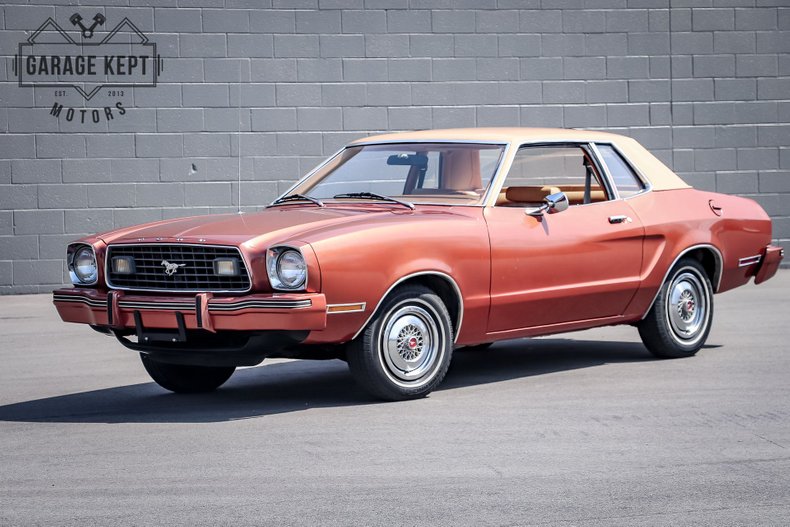 Here's a car that is still a part of Mustang history - a somewhat sad part of American car history but GM, and Ford continued to build 2 door cars based on their popular muscle car or sports car platforms. Times quickly changed for automobile design, and manufacturers went from high power V8's to small displacement V8's, V6's, or efficient 4 cylinder cars. Emissions, changing crash standards, and changing consumer interests meant that the design and engine horsepower outputs of the Mustang went through some changes. The result, in Ford's case, was the Mustang II.

Design cues from the first generation Mustang are there if you look close at this car - grille containing lights and the Mustang logo, vents at the base of the windshield, the body line on the lower part of the fenders that carries through the doors ending in the 'cove' on the rear fender, and segmented tail lights. But then there are the parts that make the car look less sporty thanks to crash regulations, the aim to be fuel efficient, and changing consumer interests: the high ride height, large sidewall tires, and big bumpers.

The eye-catching exterior color is the factory correct color of Medium Chestnut Metallic (code 5M) and is capped with a tan vinyl roof. The exterior is complete with all trim and badges where they should be. Lights and lenses, wheel covers, and those chunky bumpers are all in good condition.

Inside the car are many things that you would expect from a Mustang; bucket seats, 4 speed manual transmission, tach, AM Radio, console, and 3 pedals. The bucket seats are currently finished in a period correct color and pattern with tan trim throughout the rest of the interior. Despite feeling much smaller than the other members of the Mustang generations, this car is a lot of fun to drive, especially since it has 3 pedals.

Under the hood is Ford's 2.3 Liter 4 cylinder, which also became known as 'the Lima' engine since it was produced in Lima, Ohio. It's power output of approximately 90 horsepower, isn't exactly what one would expect to hear from a car that wore the Mustang badge. At the time though, the Mustang II was a car that sold well and kept a good market share, not because it was a fast, powerful sports car, but because it was efficient, affordable, and fun.

This pony is in great condition and is a car that will put a grin on your face when driving it. Small displacement engine, chunky looks, and a groovy color palette are departures from what is expected from Ford's pony car, but the Mustang II kept the Mustang line alive through an awkward time. Be sure to check out all the photos and video on our main website: Garage Kept Motors. Call if interested or e-mail with any questions. Thank you for looking.