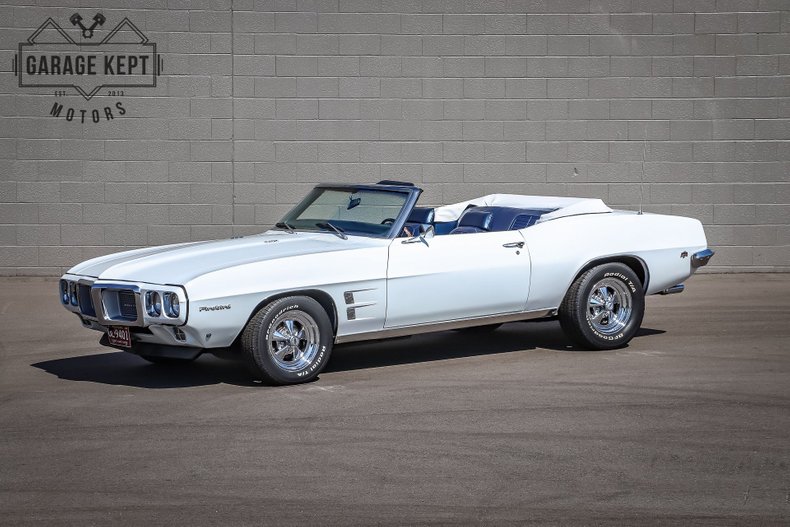 We're excited to offer this clean First-Gen Firebird convertible. The brother to the First-Gen Camaro, the Firebirds aren't quite as common although their styling was a little more unique thanks to the body and trim being more angular. Despite being based on the same platform, a Firebird coming down the road toward you wouldn't be mistaken for a Camaro of the same generation. Twin headlights, chrome bumper/grille combination, and an “ironing board” bulge in the hood was totally different from the squared off look of the Camaros. Pontiac ran multiple ad campaigns highlighting the “ironing board” hood treatment that flowed into the pointed nose which was adopted in the '60's across their range of cars. Funny how a simple styling cue like that can last decades - the pointed nose on Pontiacs stuck around until the Pontiac Division folded in 2009. No hide-away headlights, letter badges, or 'screaming chicken' on the hood, just clean lines on a handsome GM sports car.

This Firebird features a bright white exterior color with a Dark Blue convertible top. Which is a color combination reminiscent of the coveted and rare '69 Firebird Trans Am, so we immediately admired the color combination. This car left the Los Angeles California factory finished in Warwick Blue (code 53) over blue vinyl interior (code 200). Sounds like a lot of blue to us! We prefer the current white over blue combination. There were much less Convertible Firebirds produced than the coupes during the First Generation, and in the 1969 model year convertibles made up only 14% of the total Firebird production. So this car is a fairly rare bird.

Inside the car is a tidy blue vinyl interior that features a console, three spoke wood trimmed steering wheel, and a more modern AM/FM/Cassette stereo. A power top makes the transition from top up to top down much easier.

Lift the bulged hood and you're greeted by a 350ci V8 in a clean engine bay. The engine is a 265hp 350 pulled from a '68 Pontiac which is stamped with a 'YN' code. Classic chrome Cragar S/S wheels brighten up the exterior of the car. Paired with the chrome trim and bumpers, they really pop.

This Firebird may not have a 'screaming chicken' on the hood, but clean lines, a V8 under the bulged hood, and a tidy interior all add up to an awesome classic sports car. Be sure to check out all the photos and video on our main website: Garage Kept Motors. Call if interested or e-mail with any questions. Thank you for looking.