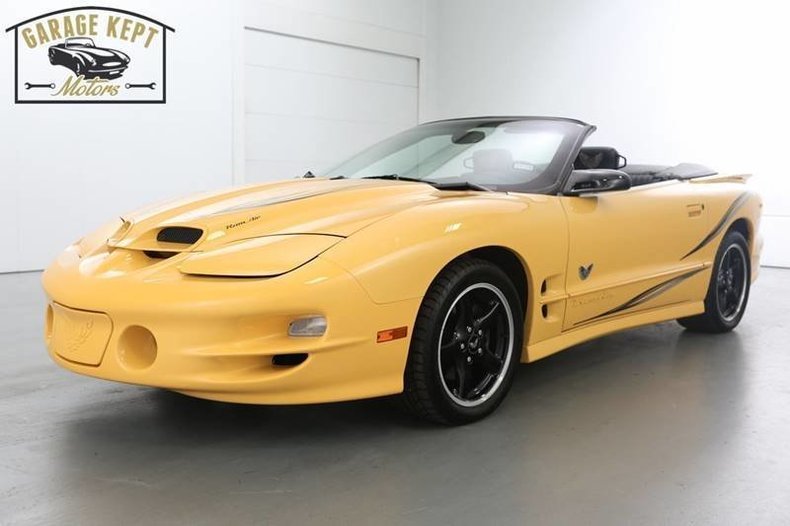 See ALL photos and video on main website: Garage Kept Motors. 2002 Pontiac Firebird Trans Am Convertible Collectors Edition – One of 554. Offered here is truly a rare bird. This 2002 Pontiac Firebird Trans Am Convertible is a Collector's Edition model with only 2,000 released in the United States. Of those cars, 1,396 came with a manual transmission and 1,042 were convertibles. Having both narrowed the list down to 554. This car is one of those 554 made in a drop-top 6-speed. One rare bird, indeed. And it only has 6,000 miles. In 2002, 30,690 Firebirds were produced and all 2,000 Z15 Collector Package models came in Collector's Edition Yellow paint. This example has a black leather interior and a black power convertible soft top. It is powered by the awesome LS1 5.7L/325hp V8 powerplant with the WS-6 Ram Air Performance Package. After a test-drive with Jay Leno in 2002, Motor Trend said it best: “The long of it is, this special yellow Firebird touts the revered 5.7-liter LS1 V-8 churning out 325 horsepower and 350 lb.-ft. of torque. The bump in power over a traditional Trans Am comes courtesy of Ram-Air induction and low-restriction exhaust. Package this in a potent 2+2 sports car with a fortified chassis, and you have a true modern muscle machine.” The car has been meticulously care for and preserved as a low-mileage Collector's Edition. It remains 100-percent original to the day it rolled off the showroom floor of Harper Pontiac of Belle Vernon, Pennsylvania. Everything functions properly as it should. This TA also comes with both sets of factory keys with remotes, original window sticker, original owners manual, original Collector's Edition floor mats, original Collector's Edition pamphlet, and 3-piece boot/cover for convertible top. It is an awesome vehicle and one that will surely rise in value over the years, especially now that Pontiac has closed its doors. You will be hard pressed to find another manual, convertible, with such low miles in this condition. You just don't see them for sale often. Call or e-mail if interested or to make a reasonable offer. Thank you for looking.