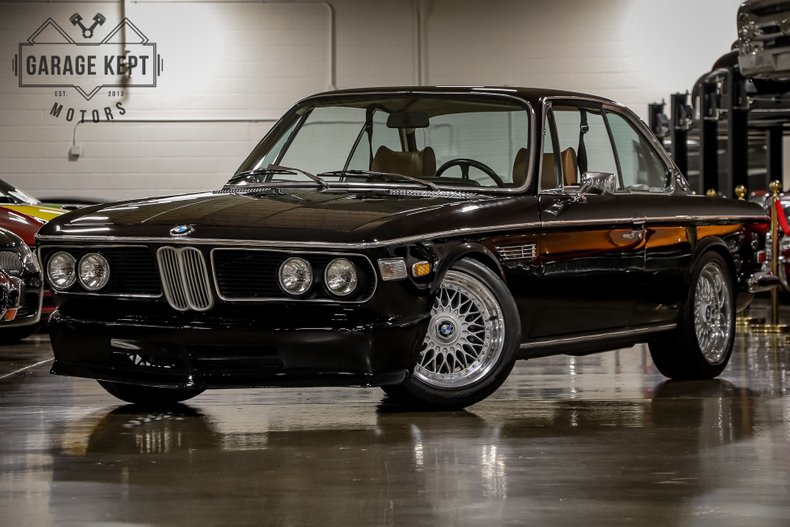 (Please note: If you happen to be viewing this 1973 BMW 3.0CS on a website other than our Garage Kept Motors site, it's possible that you've only seen some of our many photographs of this vehicle due to website limitations. To be sure you access all the more than 170 photographs and a startup/walk-around video, please go to our main website: GarageKeptMotors.)

The BMWBlog site backed up their accolade for the BMW 3.0CS model by noting the car's interior and exterior distinctiveness. Inside the car: “The dash is the main attraction… hosting four analogue gauges wrapped in wood right behind the big, airbag-less steering wheel.” They went on: “The seats feel as if you're sitting on a couch in your living room. The back seats look even more enticing, with their stitching and bucket shapes,” and “The windows are huge, offering you an open-air feeling and impeccable visibility in every direction. This is where one of the key design features of the E9 comes into play. Since this was a true coupe back in the day, it didn't have a B-pillar. The effect that has on the onlookers, especially if you roll down all the windows is just fabulous.”

Internet automotive site, Jalopnik, in a 2015 Raphael Orlove retrospective review of the 3.0CS cars put it this way: ”These E9s are just about perfectly proportioned, with just enough charming little details to be interesting but not too many to be overdone. They have a good name, and they have a good pedigree, racing successfully in FIA endurance racing in Europe through the '70s. The first BMW art car was a 3.0CSL painted up by Alexander Calder for one of his gentleman racing buddies at Le Mans '75. Hard to get a better history than that. So why would you buy a car that isn't a BMW E9 coupe? What possible justification could you have?

On the E9's racing pedigree—which directly gave rise to “The Ultimate Driving Machine” advertising—another respected internet site, Ate Up With Motor, chronicled: “(The racing version of the CS) suddenly became a fearsome contender. It won its class at the 24 Hours of Le Mans in 1973 and went on to dominate European racing until 1979…. It won a total of five European Touring Car championships and was highly successful in various U.S. events as well, seriously challenging Porsche's previously unassailable IMSA domination.“

BMW E9s, like the 3.0CS offered here, are special cars indeed. But this beautiful black-over-caramel example is more special than most. First, it's a California-delivered (land of no rust) car. Second, it's a documented original CS”A” (for automatic) coupe. According to its VIN, this is one of only 738 3.0CS(A) cars produced for model years 1973 through 1975 (out of a total run of 3,667 over the model's five years of production according to the “E-9 Driven Worldwide Registry).” Third, the car was beautifully restored in Phoenix, Arizona, inside and out, as the more than 170 photographs available at GarageKeptMotors site demonstrate. The photos alone are a delight, sure to captivate any automobile enthusiast whether a “BMW guy” or not. For the interested buyer, the high-definition still photography permits inspection of the level of detail exhibited, and the accompanying video gives an audible sample of the car's exhaust note. (We encourage in-person inspection of the car by appointment only.)

But maybe most of all, this 3.0CS is so special because of its remarkable updates. Look under the hood. This is no garage queen; this E9 restoration is meant to be driven… on today's roads at today's speeds. Powered by a BMW 6-cylinder “M” 3.2-liter 6-cylinder inline engine from a late-model BMW E46 M3 married to a six-speed manual transmission, there are none of the often frustrating challenges of maintaining and repairing a 50 year-old powerplant (In a delightful vintage-respectful touch sure to draw attention at car-enthusiast gatherings, the car's “automatic” rear-deck emblem has been retained). A complete Wilwood disc-brake system and updated suspension are also in place, as are )17-inch BBS-style basket weave alloy wheels with BMW centercaps. Unlike too many cars of this era that must be trailered to cars-and-coffee or concurs events, this 3.0CS will definitely be driven. It will also be driven home… and then driven some more.

Performance? Reliability? Classic good looks? A model prized by collectors? Colors that prompt oohs and ahhs? Why choose one or two when you can have it all?