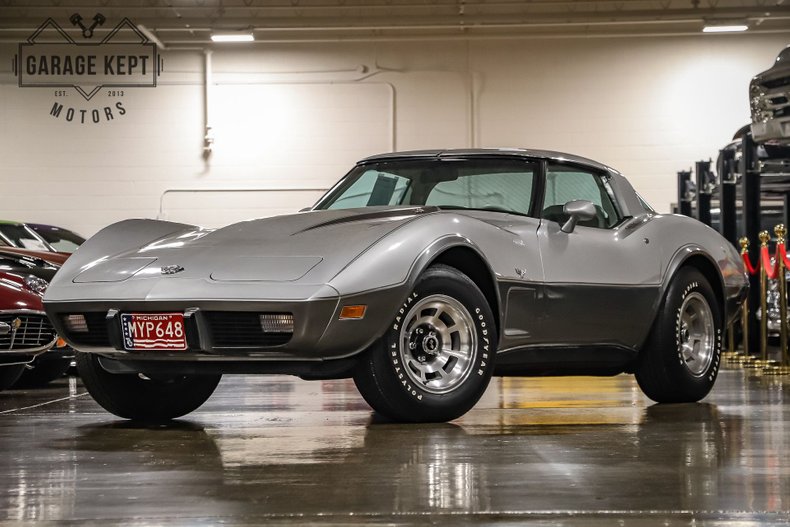 (If you happen to be viewing this vehicle on a website other than our main website, it's possible that only some of our many photographs are presented due to website limitations. To be sure you access all the photographs, please go to our main website: Garage Kept Motors)

Garage Kept Motors is pleased to offer this beautiful, and original Corvette Silver Anniversary. 1978 marked the 25th Anniversary of the Corvette and to commemorate their beloved Vette, Chevrolet offered their Silver Anniversary trim package. The car was redesigned with a fastback look that included a wrap-around rear window for more space behind the rear seats. It also helped with visibility. It was the first two-tone Corvette since 1961 and only 15,283 were built.

This 1978 Chevrolet Corvette Silver Anniversary Coupe is finished in unique Dark Gray/Silver Metallic paint over an 'Oyster' interior. With the unique to the special edition badges on the hood and fuel door. The car is powered by the original L82 350 V8 with an automatic transmission and rear-wheel drive. It also features power windows, Factory A/C, AM/FM radio, tilt steering wheel, removable t-tops with storage bags, power door locks, power windows, power brakes, power steering, rear defrost, and 15-inch wheels with the original original Goodyear Polysteel Radials still on it and in great shape. To say the least, this car came rolling off the St.Louis Assembly plant loaded with options.

According to the original Bill of Sale, this car was purchased by a customer by the name of Wilbur from Houghton Lake Michigan, and was ordered by Ben Hodges Chevrolet Oldsmobile of West Branch Michigan in October of '77. It was delivered by the ordering dealership on December 22 of '77, so the car ended up being a pretty sweet Christmas present for Wilbur. Wilbur owned the car until his passing in 2017.

When our client acquired the car, the odometer showed approximately 5800 miles. All the original documentation and brochures are present, including the punch tabs for the keys. The car was extremely well cared for since delivery, and our client continued to show extra care for this car when it was in his possession. This one has always been garage kept for sure!

It is a nice running and driving example that won't break the bank. These C3's, especially Anniversary Editions, are on the rise in collectibility. Be sure to check out all the photos and video on our website: Garage Kept Motors. Call if interested or e-mail with any questions. Thank you for looking.