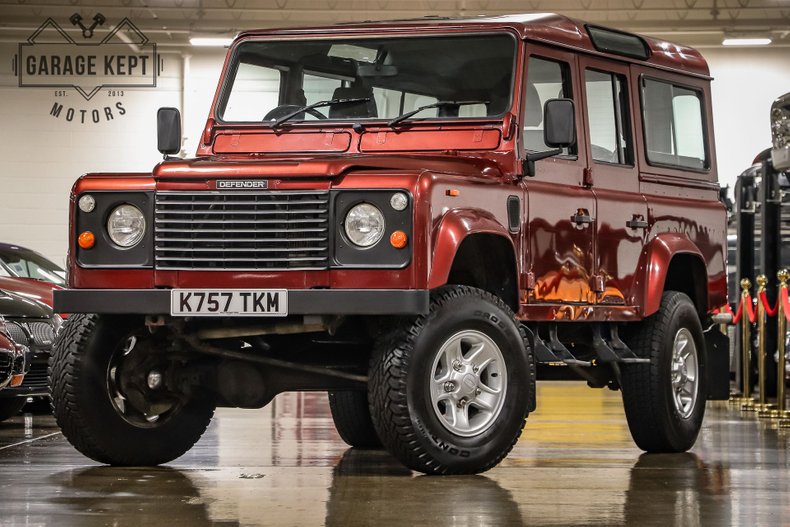 (Please note: If you happen to be viewing this 1993 Land Rover Defender 110 on a website other than our Garage Kept Motors site, it's possible that you've only seen some of our many photographs of this vehicle due to website limitations. To be sure you access all the more than 50 photographs, please go to our main website: GarageKeptMotors.)

“Nothing is more British than the Land Rover Defender. Not the royal family, not warm beer, not even an understanding of cricket's LBW rule or the baffling urge to have a lovely cup of hot, milky tea when the temperature is nudging 90 degrees Fahrenheit in the shade.”

Passionate off-roaders were thrilled by the Defender 110 from the moment it appeared: “We here at Four Wheeler (magazine) openly loved it, while hating the $39,900 price none of us could afford. Plus, it was galling to know most would be in the hands of people unlikely to appreciate its off-road abilities. When Four Wheeler Editor John Stewart tested the D110 for the Oct. 1992 issue, he said, 'The Land Rover Defender 110 is the only vehicle to be sold in the United States with off-road capability as its first design priority. That alone -- a refreshing clarity of purpose -- should tell how different it is.'”

Generally speaking, as the magazine editor implied, there are two types of Land Rover Defender owners. One chooses the vehicle for the almost celebrity status the brand evokes. It is a tool to massage ego. The other is just the opposite, intent on taking full advantage of the commanding off-road capabilities that made Land Rover a legend across the globe, in many places where roads were at best, limited.

The red-metallic Land Rover Defender 110 offered here, a right-hand drive, home-market U,K, diesel Tdi version, has clearly taken its owners well off the beaten path. It wears its minor scars and signs of use (but not abuse) proudly. A bit of missing paint here, some scuffed interior panels there, a rear seatback obviously no longer fully attached to its seat. Nothing really broken, but of the vehicle's 160,000 miles (under 7,000 miles per year on average), it's safe to say a good number were not spent waiting to pick up kids at school. More than likely, many of the roads that passed beneath this upright, boxy body were actually gravel, dirt, and open field-grass, rather than asphalt. (To more fully assess the Defender's condition, be sure to watch the walk-around video and check out the more than 50 detailed photographs on the GarageKeptMotors site.)

To be sure, this Defender offers creature comforts, albeit a bit limited by today's extra-cushy luxury standards. There's a sunroof. There's an audio system. There's nice subdued plaid gray upholstery, with gray carpeting as a complement. There's seating for eight, including four in the facing rear bench seats. There's a clock. But there are no DVD video players. No pop-up navigation screen. No massaging seat-bottoms. On the other hand, there's that torque-beast of a turbo-diesel engine. Car and Driver preferred this diesel to the optional V8, noting: “…the gruff-sounding Ford-sourced 2.2-liter turbo-diesel provides vastly more urge than even the V-8.”

And underneath, there is the legendary Land Rover build-quality, as Four Wheeler magazine pointed out: “The chassis was… burly 14-gauge steel and fully boxed. The multi-link coil suspension was the same, though with springs tuned for comfort rather than load capacity.” And: “The front axle was virtually the same as Range Rover. The HD rear axle, commonly known in Britain as the 'Salisbury,' was a British-built Dana 60 clone with full-float Rover hubs and 24-spline shafts. The T-case was Rover's gear-driven LT-230T full-time unit, featuring a manually locked center diff and a 3.32:1 low range.” Serious business.

Not every four-wheel-drive shopper will find their answer in this Defender 110. But it's also safe to say those wanting—or needing—to test a vehicle's capabilities where the road ends and real adventure begins, will find no other answer anywhere near as satisfying as this stout British export.