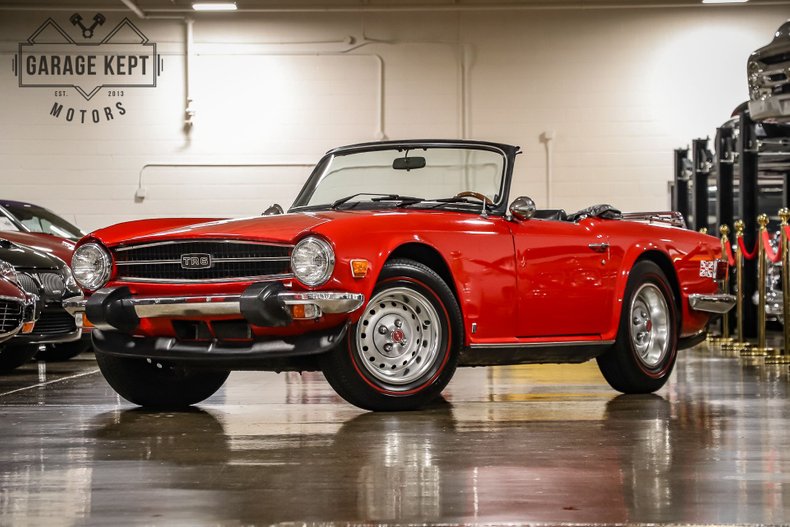 (Please note: If you happen to be viewing this 1975 Triumph TR6 on a website other than our Garage Kept Motors site, it's possible that you've only seen some of our many photographs of this vehicle due to website limitations. To be sure you access all the more than 150 photographs, please go to our main website: GarageKeptMotors.)

“The TR6 was in a class of its own in the 1970s. (More than) a quarter of a century on, it still has few competitors that can offer so much and for such a modest price.”

In many ways, the Triumph TR6 is the last in a long line of affordable open-air British sports cars legends: MGs, Spitfires, Austin Healeys. Opinions on the relative merits of each can generate debate among brand loyalists, but there's general agreement that open-air, top-down motoring is an experience the British perfected. And by the time 1975 rolled around and TR6 production was ending with nearly 92,000 cars produced over the years, performance ,comfort, and reliability had been nicely engineered into the model. As Classic Motoring explained…

On performance: “Power delivery from the six-pot engine is smooth and refined, and more than sufficient to make the tail squat down when you boot the throttle. The ride is sportscar firm, which will feel harsh compared to a modern family hack but never comes close to threatening your fillings. The front anti-roll bar helps make the handling more predictable, but the tail can still get skittish, wet or dry. The good news is that feedback from the road to the driver is excellent, so hustling a TR6 becomes a test of driver skill and control rather than a lottery. The servo-assisted brakes are generally reassuring, and can be made even better with use of a modern friction material. If cruising is your game, the overdrive is geared to place 100mph easily within your grasp. And there is more than enough torque available to dispatch motorway overtaking with nothing more than a flick of the switch into direct drive.”

On comfort: “The fixtures and fittings are not quite opulent, but they do have a fair sense of luxury about them. They are traditional too with the… large rev counter and speedo dead ahead and minor gauges mounted centrally harping right back to the TR2. The seats are comfortable and durable, although the backrests are shorter than you might expect. The car's size means there is never any danger of getting that traditional bum-six-inches-off- the-road feeling. Instead it feels more of a grand tourer than an out and out hell-raiser.”

On reliability: “… once sorted and in tune, then a TR6 is a relatively easy car to own, with simple mechanical underpinnings that lend themselves to DIY maintenance.”

The beautiful bright-red TR6 offered here is a well cared-for, two-owner example originally imported to, and owned in Arizona. And a very cool story to go with it. In 1999, our client was vacationing in Phoenix with a friend and saw this car for sale in the local paper. He called up the seller and discovered the car was in his garage only 2 blocks away. Our client went for a short walk, took the car for a test drive, and bought it on the spot. The seller was the original British owner who had the car imported to Arizona after his retirement. Right before he put it up for sale, the car was repainted in base coat, clear coat in the gorgeous red paint you see today. The car has had recent mechanical refreshing consistent with the attention paid to the car over its 80,000 miles (a very conservative 2,000 miles per year on average). Exterior paint, brightwork and styled steel wheels retain excellent gloss, and interior surfaces including the wood dash, Smiths instruments, perforated black-leather upholstery surfaces all show well. The floor-mounted four-speed manual transmission shifter knob featuring the colorful Triumph logo, together with the similarly branded wood-rim sport steering wheel, are classic Triumph touches. The engine bay is clean, tidy and complete, even retaining the service sticker from British car expert University Motors in Kalamazoo, Michigan. Red-stripe tires and the Union Jack flag on the rear quarter-panels complete the “TR6 statement.”

Ready to make that statement yourself? Come see, sit in, and drive this lovely TR6.