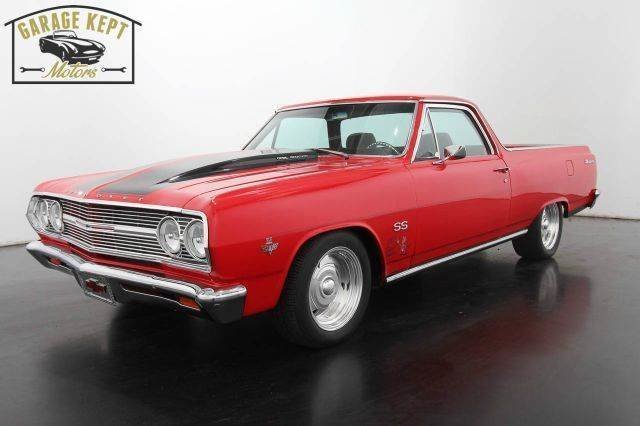 The Chevrolet El Camino is one of the most recognizable classic cars on the market. Following in the footsteps of Ford's Ranchero, the idea actually launching in the 1930's for "a vehicle to go to church in on a Sunday and which can carry our pigs to market on Mondays," the El Camino was birthed in 1959. It offered the intimacy of a coupe combined with the utility of a pickup. The first generation models ended in 1960, and then 4 years later in '64, Chevrolet reintroduced their beloved El Camino based on the iconic Chevelle's styling. 1965 marked the first year that a 327 was offered, pushing out 350hp, and could compete off the line with the likes of its Chevelle counterpart. The El Camino continued production until 1987 when Chevrolet finally discontinued the model. Offered here is a classic 1965 El Camino resto-mod, a serious head turner for both incredible looks and sound. Coming out of a down-sizing collection in Washington State, this El Camino was the recipient of a full restoration at 67,000 miles about 10 years ago. It has since been mainly driven to car shows, for another 3,400 miles of hauling home trophies. The stock 327 was replaced with a full 383 Stroker, putting out approx.430hp, and mated to a Turbo 350 automatic. While in excellent condition, it is not a trailer queen, and can be driven without reluctance. Please forgive the “SS” and “Cowl Induction” badging, as the owner simply fell to the temptation. A great, nostalgic classic at a good price.